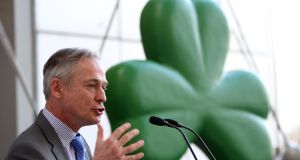 One million euro will be invested in an Irish data analytics centre for researching “big data”, a key area of the government’s job growth plans, Minister for Jobs, Enterprise and Innovation Richard Bruton announced today.

The Centre for Applied Data Analytics Research, CeADAR, will carry out research into challenges in the sector at University College Dublin and will work in partnership with University College Cork and Dublin Institute of Technology.

Data analytics focuses on converting large amounts of raw data into valuable information through the use of statistical analysis and advanced software.

CeDAR’s focus will centre on developing ways of generating business, profit and ultimately jobs from the high-growth area.

Multinational and Irish companies, including eBay, Accenture, Dell, Fidelity Investments, Adaptive Mobile, and HP will set the research agenda at the centre.

The data analytics sector is growing at 40 per cent per annum worldwide and is targeted for jobs growth as part of the government’s Action Plan for Jobs 2013.

Making the announcement today, Mr Bruton said, “A key part of this Government’s plan for growth and jobs is identifying areas where we believe Ireland has distinct advantages compared to other countries, and taking steps necessary to ensure that we realise our potential for employment in those areas.

“Establishing an industry-led technology centre in this sector will ensure that the major research strengths we have built up over the past decade are directed firmly towards viable business ideas and ultimately jobs.”

1 Ireland has fifth-largest number of billionaires per capita in the world, says Oxfam
2 Companies should not use the climate crisis as a scapegoat
3 Irish rents see second-highest increase in the EU since 2007
4 PTSB finance and operations executives vie for chief executive job
5 State-backed Finance Ireland weighs stock market flotation in 2020
Real news has value SUBSCRIBE