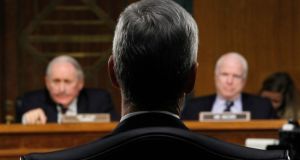 It looks like the controversy over Apple’s Irish tax arrangements is going to linger like the proverbial bad smell. The story may have burnt out in the US, dismissed as partisan posturing by Democrats under pressure over politicised tax investigations of rivals. But on this side of the Atlantic it remains alight.

The problem is not the Irish rate or the double Irish or even the “tax haven” moniker. We have been here before several times. Most recently when Microsoft’s Ireland-based tax rink dink – including the uncannily appropriate Round Ireland One unlimited company – came to light. Then, as now, American politicians grandstanded in a fashion that would make members of the Dáil Public Accounts Committee seem measured but baulked at any significant action.

The reason being that any response necessitates a massiveoverhaul of the US corporate tax code which, despite its complexity, actually works quite well given the global dominance of US multinationals and US banks As a result, no one wants to tinker with it despite the poor optics around the effective incentive of US corporations to keep as much of their profits outside the US they can.

This is the issue that lay behind the Microsoft furore and was at the centre of last week’s Apple hearings – certainly as far as the Americans are concerned. Ireland may have been trashed at the senate hearings but it is obvious that the “double Irish” and its ilk are all creatures of the US tax code. Without its peculiarities, there is no need for them.

What is different this time, and what is causing the lingering smell, is the claim that Apple got a special deal with the Irish Government which allowed it achieve a tax rate of 2 per cent on Irish recorded profits rather than the statutory 12.5 per cent.

If the claim is true then it is very bad news as it means that Ireland has broken faith not only with international bodies like the OECD and the International Monetary Fund, but also with our European partners. And last, but not least, the multinational community itself.


Tax haven fatwa
One of Ireland’s less publicised achievements in recent years has been keeping ourselves off the OECD list of tax havens. The only tangible consequence of the last blow-up in the US over corporate tax was an effective fatwa on using tax havens as part of corporate tax structures.

Ireland escaped the tag – despite having many of the advantages – because, among other things, we claimed we did not do company-by-company deals. We said the system was absolutely transparent and statute-based. This would now appear to have been a bit of a porky.

The transparency of the Irish corporation tax rate was also a central plank in the Government’s defence of our 12.5 per cent rate over the last five years as other European governments put pressure on us to increase it.

The counter argument has always been that when you look at the various clawbacks and incentives available to companies in these other jurisdictions the Irish rate is not that far out of line. The claim that we offer incentives over and above 12.5 per cent badly undermines this argument if it is true.

The third problem is the damage it does for our relationship with other multinationals. You can be pretty sure the first thing that popped into the head of the chief executives of other US companies with operations here when they heard Apple’s testimony was: “Do we pay 2 per cent and if not why not?” The only ones who would not have asked the question are the chief executives of the other 10 companies offered similar deals in 1990, according to the Sunday Business Post yesterday.

While these probably include all the big players who were here in 1990 and still remain – think pharmaceuticals and Intel – they are unlikely to include the big wins of the last decade such as Google. At the very least, the IDA has some explaining to do if it is true.

And this is the nub of the issue. Nobody seems to know if this very damaging claim is true. The Government has denied categorically that Apple has a deal; Apple’s senior executives have testified under oath to the US senate that they have a deal – but seem to have lost the paperwork . The senate’s own experts can’t figure out if it was a “deal” or just an uber-clever interpretation of the Irish tax code that the Revenue Commissioners rolled with.

In politics this sort of thing is sometimes referred to as constructive ambiguity. No one is shown to be lying; everybody is confused and hopefully loses interest. The US and Irish public will probably lose interest. The same can’t be said for the OECD, France, Germany and those chief executives paying 12.5 per cent.

3 Cliff Taylor: Some have done a lot better than others during Covid