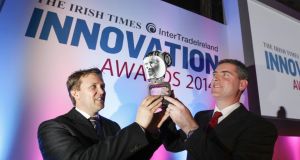 The historic baroque architecture of Royal Hospital Kilmainham in Dublin played host to 3D presentations and a host of high-tech new innovations at this year’s Irish Times InterTradeIreland awards.

Guest of honour was Taoiseach Enda Kenny, who had the previous night attended the official banquet at Windsor Castle hosted by Queen Elizabeth, as part of the State Visit by President Higgins to Britain.

The Taoiseach was not alone in flying in from Britain in time to attend this year’s awards. The overall winner was also in Britain hours before the event.

Instead of witnessing the pomp and pageantry at Windsor Castle, however, Wayne Byrne was waist-deep in the waste water of Birmingham’s main treatment plant, demonstrating OxyMem’s new technology to potential buyers from across the world.

It was this export-orientated approach and a focus on the global potential of new business ideas that featured in the Taoiseach’s keynote speech as well.

In a speech that touched heavily on the significance of the visit to Britain by President Higgins, Mr Kenny underlined how stronger links across the islands can boost business.

He spoke of a recent joint trade mission by the trade ministers from the Republic, Northern Ireland and Britain to Singapore and how it may offer a template for future missions.

Then it was time to don the 3D glasses and witness some of the remarkable innovations competing in this year’s awards.

UCD spin-out OxyMem was named the overall winner of The Irish Times InterTradeIreland Innovation of the Year award.

The awards ceremony was presented by Matt Cooper and attended by more than 200 invited guests. The event featured live 3D presentations, with guests wearing active 3D glasses. A 3D printer was also at work during the event, creating the overall award.

This is the fifth year of the awards, which attracted 322 registrations this year, from which 18 entries were shortlisted for the final round of judging. These firms then presented their ideas to a panel of judges chaired by tech entrepreneur Chris Horn, and comprising Thomas Hunter McGowan of InterTradeIreland, venture capitalist Brian Caulfield, Ivan Coulter, founder of Sigmoid Pharma and winner of the first Innovation award in 2010, Mary McKenna of Learning Pool, Norman Crowley of Crowley Carbon, and Mark Nodder of The Wright Group.

The first round of judging was carried out by a panel comprising Pat Daly of Teagasc, Timothy Brundle of University of Ulster, Dr Marion Boland, head of Science Foundation Ireland, Aiden Gough of InterTradeIreland, and Prof Frank Roche of the UCD Michael Smurfit Graduate Business School.

Overall winner: OxyMem
UCD spinout company OxyMem has developed a revolutionary new system which can dramatically improve energy efficiency as well as bringing other improvements in terms of ease of deployment. Waste water treatment is a biological process which uses bacteria to break down the waste substances in the water.

To do this, the bacteria requires oxygen which in traditional plants is supplied through an energy-intensive forced aeration system which sends bubbles of compressed air through the bottom of the treatment tank, technology which has been in use since 1914.

Typically, less than 30 per cent of the oxygen supplied is transferred to the wastewater, resulting in enormous energy waste. The OxyMem system has no such limitations and is capable of achieving up to 95 per cent transfer efficiency.

Instead of relying on bubbles to transfer oxygen, the system uses gas permeable membranes, which allow oxygen to be transferred directly to the wastewater- treating bacteria delivering oxygen transfer efficiency (OTE) of up to 95 per cent.

The system has been shown to deliver operating cost reductions of 75 per cent and this will be very attractive to the main markets for the new technology which are in the developing world.

The original research into the process was carried out by Prof Eoin Casey in University College Dublin, one of the world leaders in membrane technology, with support from Enterprise Ireland since 2003.

Following successful trials of a pilot scale unit at Severn Trent Water’s Minworth, Birmingham facility in 2013, OxyMem was spun out of the university as a standalone company.

“We have raised €250,000 in seed funding with the support of Enterprise Ireland and have opened a manufacturing facility employing six staff in Blyry in Athlone,” says Mr Byrne. “We are hoping to grow to 25 to 30 staff by the end of this year.”


Winner: IT & Telecoms – Shimmer
A device which can monitor an individual’s location, their movements, and physiological data such as their pulse rate may sound a slightly Orwellian, but the Irish-designed and developed Shimmer wearable wireless sensor offers considerable potential benefits particularly for people’s health and wellbeing. The device wirelessly communicates collected data in real-time to wherever it needs to go – a health clinic or a sports coach for example. It provides medical researchers, computer scientists and product development teams with a best- in-class vehicle for data capture that is robust, unobtrusive and ready to use.


Winner: Manufacturing – Foldeaze
Anyone who has ever struggled to put together “easy-to-assemble” furniture will give a warm welcome to a new invention from Newry-based company Foldeaze. The new BRIAR clipping system will put an end to the hours of frustration trying to make sense of dozens of different types of screws, bolts and fixings and interpret near-incomprehensible plans. The concept is a plastic clipping system that allows two pieces of material to join together easily without the use of tools, glues, nails or screws. All you have to do is press them together and wait for a clicking noise.


Winner: Agri-Food – Richard Keenan&Co
Keenan mixer wagons are a familiar sight on farms right across the world. The latest innovation from the company is the Keenan inTouch, a food production platform which has the potential to link the entire supply chain from farm to processor to retailer. It combines engineering, nutrition and IT technologies to deliver a repeatable result on farms which improves sustainability and profitability for farmer and processor.The system was launched in 2012 and will now be fitted on all machines as standard, which will bring it to all markets served by the company.


Winner: Creative industries – Viddyad
Viddyad has developed a new service which allows SMEs to create and produce their own professional-standard video advertisements for the web for as little as $99 for a 10-second ad. That includes video content, music, transitions, and the ability to upload your own text and images. Founder and chief executive Grainne Barron describes Viddyad as the world’s first fully-automated cloud-based video ad creation platform with access to content, distribution and publishing tools all in one place.

Winner: Bioscience – APC
APC Ltd has developed, designed and marketed proprietary engineering platform technologies that reduce the time, costs and risk in the development and supply of new and existing chemical and molecular entities to the market.The market for APC’s solutions is partly driven by the necessity for pharmaceutical companies to develop and supply their medicines in a cheaper, quicker way while also developing a more sophisticated understanding of the process.

1 Charlie Chawke plans 290 apartments and hotel on Goat pub site
2 Tax and the Pandemic Unemployment Payment: Your questions answered
3 Four things that could help Ireland escape from the Covid-19 recession
4 Row over ownership of Fota Island resort comes before High Court
5 Revenue fears fraudsters tapped bank details of 3,000 taxpayers
6 Brown Thomas and Arnotts shoppers will be able to book time slots for entry
7 Joint accounts: if one of us dies, can the other access the money?
8 College of Surgeons faces legal challenge to Na Fianna GAA contract
9 O’Leary casts unwelcome light on a very Irish political compromise
10 ESRI warns of biggest slump ever, Brown Thomas’ plans and Michael O’Leary has a point
Real news has value SUBSCRIBE