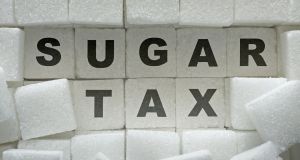 Prof Donal O’Shea, consultant endocrinologist and chairman of the the Royal College of Physicians of Ireland Policy Group on Obesity, dismissed claims from the Irish Beverage Council that a sugar tax will not work. Photograph: Getty Images

The immediate introduction of a tax on sugar-sweetened drinks is the single most important thing the Government must do if it wants to begin to tackle the obesity crisis, according to the Republic’s leading expert in the field.

Prof Donal O’Shea, consultant endocrinologist and chairman of the the Royal College of Physicians of Ireland Policy Group on Obesity, dismissed recent claims from the Irish Beverage Council (IBC) that a sugar tax will not work and said he would expect the number of obese Irish adults to fall by as much as 22,000 in as little as three years after the tax was introduced.

The IBC has claimed that a sugar tax – which is likely to get the green light in Minister for Finance Michael Noonan’s upcoming budget – will increase the average household’s annual grocery bill by €60 but will not help tackle Ireland’s obesity problem.

However, this was refuted by Prof O’Shea. “Lobby groups opposed to the tax claim it will threaten jobs and claim it won’t work but they have to say that. If you were to pick just one thing that would have the greatest impact in the shortest space of time it would be to introduce a tax on sugar-sweetened drinks.

He cautioned that if and when a tax is introduced it will have to be policed carefully to ensure that the soft drinks industry did not seek to circumvent it by selling sugar-sweetened drinks at below cost, and he called on the Government to ensure that all money raised through any such tax would be put into health initiatives.

His comments were echoed by Cliona Loughnane, policy and research manager at the Irish Heart Foundation.

“The link between sugary drinks and obesity is impossible to deny,” she said. “These products have no nutritional value.”

She accused industry lobby groups of being “disingenuous” and said “the key reason they are so opposed to the introduction of a sugar tax is that they believe it will work and it will see people moving away from their products as we have seen in countries like Mexico and in France”.

Mr Noonan may delay the implementation of the levy for a year until 2018.

It will follow similar moves in the UK, which has also delayed the take-up date for the new tax until 2018.