Budget retailer could be worth more than €50bn within a decade, says US investment bank 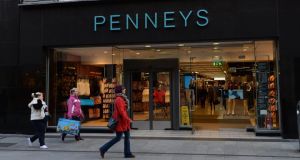 Morgan Stanley forecasts that by 2018 Primark, as Penneys is known outside of Ireland, will account for 42 per cent of sales and 62 per cent of profits within the wider Associated British Foods group. Photograph: Cyril Byrne

Budget retailer Penneys could be worth close to €36 billion, according to an assessment by US investment bank Morgan Stanley, the Sunday Independent reported.

According to the paper, the bank suggested that Primark, as Penneys is known outside of Ireland, could be worth as much as H&M, which has a market capitalisation of €54 billion, within the next decade.

Morgan Stanley forecasts that, by 2018, Primark will account for 42 per cent of sales and 62 per cent of profits within the wider Associated British Foods group, of which it is a part, driven in part by the acceleration of the store’s expansion in Europe. The paper says there has been increasing speculation in recent months that ABF may seek to spin Primark off into a separate listed company.

The paper reports Revenue has indicated that interest relief must be stopped, or reduced, for anyone unable to meet their mortgage payments.

The ruling will push up to 140,000 homeowners deeper into debt, the newspaper said.

Traditionally, tax relief at source (TRS), which is being scrapped entirely at the end of 2017, was charged on the basis of the amount of interest charged by the lender on a mortgage in a given year.

However, Revenue has instructed that from January 1st last, TRS must be calculated on the basis of interest actually paid, hitting those who have fallen behind with their payments.

As banks typically give TRS a month in arrears, the paper reports, homeowners will feel the impact of the new arrangement this month. It will also adversely affect lenders by increasing arrears.

However, neither Danny McCoy nor Jack O’Connor is advocating a return to social partnership, according to the Sunday Business Post.

The two men are reported to be interested in agreeing an “incomes policy”, involving a mechanism for resolving industrial disputes, and the paper reports that informal discussions have already taken place.

Ideally, the Government’s role, Mr McCoy is reported as saying, would be to guarantee income tax reductions.