Seeing the history of our species through the prism of innovation 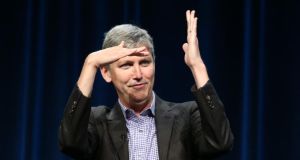 Author Steven Johnson discusses his new book and TV series ‘How We Got To Now’. Photograph: Frederick M Brown/Getty Images

Disruption is a term that gets used a great deal these days, to the extent that it’s losing its meaning. Disruption is now a marketing fad, a fashionable epithet that PR people use in press releases in the vain hope that some Silicon Valley glitz will rub off on their client’s pedestrian “new” thing.

Surprisingly, it’s a word that doesn’t appear in Steven Johnson’s new book, How We Got To Now, but it’s there on every page. This is the story of the people and things that altered the history of innovation, the epoch-making ideas that changed our world.

“California is the church of disruption,” says Johnson. “I have a writer’s animosity toward buzz words. But the real problem is the assumption that disruption is always good.” The history of innovation, he says, is in part the story of unforeseen consequences.

The incredible technological achievement led by Google’s algorithms altered how we navigated the web, he says, improving the experience to the extent that nobody wants to go back. But the indirect impact on the newspaper advertising market has decimated the business model of independent, investigative journalism. “It’s genuinely unclear whether what we’ve gained is worth what we’ve lost,” he tells The Irish Times.

The joy of Johnson’s book lies in the storytelling. Each chapter takes a single subject and asks us to think for a moment about the extraordinary chain of events that led to the everyday items we take for granted. The six topics are: glass, cold, sound, clean, time and light. “Basically, the book is me wondering, what’s the deal with that anyway?”

His introduction explains what to expect from the book: “Our lives are surrounded and supported by a whole class of objects that are enchanted with the ideas and creativity of thousands of people who came before us: inventors and hobbyists and reformers who steadily hacked away at the problem of making artificial light or clean drinking water so that we can enjoy those luxuries today without a second thought, without even thinking of them as luxuries in the first place . . . We are indebted to those people every bit as much as, if not more than, we are to the kings and conquerors and magnates of traditional history.”

The central idea of Johnson’s book is that great innovations are due to a “hummingbird effect”, named after Edward Lorenz’s “butterfly effect” – that a change as tiny as the flap of a butterfly’s wings can lead to an effect of a hurricane on the other side of the world: ‘The extraordinary (and unsettling) property of the butterfly effect is that it involves a virtually unknowable chain of causality; you can’t map the link between the air molecules bouncing around the butterfly and the storm system brewing in the Atlantic. They may be connected, because everything is connected on some level, but it is beyond our capacity to parse those connections or, even harder, to predict them in advance. But something very different is at work with the flower and the hummingbird: while they are very different organisms, with very different needs and aptitudes, not to mention basic biological systems, the flower clearly influences the hummingbird’s physiognomy in direct, intelligible ways.”

A cast of “time travellers” as he calls them, populate his book. These are people who bring new perspectives to existing problems. They share a tendency to exist on the margins, either of society as a whole or more narrowly, within their particular area of expertise. ‘The defining characteristic of a genuine innovator is that they cultivate hobbies, often combining a day job with a million and one different interests,” he says, referencing Apple’s co-founders, “that whole ‘Jobs and Wozniak working in the garage’ model”.

This hobbyist tendency encourages “the weird collision of interests” that are at the heart of creativity.

The student was Galileo and what he had stumbled upon was the first pendulum, the basis of the first accurate timekeeping and navigation, changing our relationship with time. Without clocks the Industrial Revolution would have taken far longer to happen, sea travel became safer and so supplies of raw materials were made easier. The cluster of talent in British watchmaking formed the backbone of engineering advancements.

Who are today’s time travellers, the genuine disrupters of our day?

“It’s hard to look beyond Elon Musk, ’ says Johnson. Musk is the billionaire entrepreneur and inventor who made his first fortune from PayPal and “who is at the forefront of at least three disruptive technologies - electric cars, space travel and solar power”.

Johnson says that Musk’s Tesla electric car is at “this really interesting intersection where the entire stack of assumptions and preconceptions around the automobile”.

“It’s basically been a static model for 50 years. We’ve got these cars that we own and fill with fossil fuel, park in our garage and drive to work. The whole model is about to be blown apart. The Google car thing is completely real. We won’t be driving our own car and the usage patterns will change fundamentally. They will be powered by batteries much faster than people think. Uber and Lyft are steps in the change and Musk is driving that more than anyone else.”

Again the law of unintended consequences hovers above the excitement of the new. Silicon Valley’s version of the car may be inevitable but at what cost, in terms of economics?

This is a point made by Fred Vogelstein in the Washington Post recently. Vogelstein, the author of Dogfight: How Apple and Google Went to War and Started a Revolution, wrote: “I’d argue that Silicon Valley is becoming as dominant a place in the American economy as Detroit was during the first half of the 20th century.

“The best and brightest now all want to move west to work at companies like Google, Apple, Facebook, Twitter, Amazon and Microsoft. The problem is that while those companies are creating as much wealth as the automakers did at their peak, they employ only a fraction of the people.

“The automakers employed more than one million workers by the 1950s, when GM was the most profitable company in the world. The top tech companies by market capitalisation – Google, Apple and Microsoft – employ less than 25 per cent of that.”