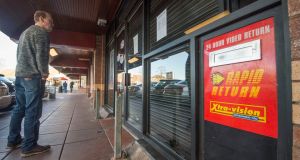 Weak trading in the run-up to Christmas, when sales collapsed by a quarter compared to December 2014, spurred the decision yesterday by Hilco Capital to place Xtra-vision into provisional liquidation with the loss of 580 jobs.

The Xtra-vision brand is likely to survive via an online business, however, while its DVD vending machine business is also set to continue.

Hilco’s HMV music store chain may also seek to buy back a small number of the 83 Xtra-vision stores and reopen them under separate ownership.

Hilco told the High Court yesterday that December usually accounts for 25 per cent of revenue at the movie rental and sales chain, but trading last month “seriously underperformed” and was 30 per cent behind budget.

Hilco said Xtra-vision’s turnover in 2015 declined “very significantly and very suddenly” due to the migration of movie rental customers to online streaming, the effects of video piracy and illegal downloading.

Sales are projected to be about €38.5 million, compared to about €51 million in 2014. Xtra-vision recorded higher sales in the eight months of 2013 for which it was owned by Hilco than the whole of 2015.

Bleak sales in the following three months, however, led Hilco to close the business and seek the appointment of Michael McAteer, an insolvency partner with Grant Thornton accountants.

Hilco, which bought Xtra-vision out of receivership in 2013, also owns music retail chain HMV, which was unaffacted by the liquidation application yesterday for two companies associated with Xtra-vision.

Hilco told the court HMV may look to engage with Mr McAteer about the possibility of hiring some of the sacked Xtra-vision workers to reopen a small number of its outlets under separate ownership.

The vending machine business may also hire some of the workers, the court was told.

Filefigure 30, a UK business associated with Hilco, is owed at least €2.7 million by way of a secured loan to Xtra-vision, while it also provided a working capital facility that was increased to €5.5 million in October.

Xtra-vision also owns several million euro worth of DVD stock, although most sales stock was paid for only once bought by customers and was held on consignment basis from film distributors.

Much of this stock will be returned to the suppliers and will not be sold on by the liquidator.

Filefigure 30 is expected to seek to resolve any retention of title claims “as soon as possible on a commercial basis”, according to documents filed with the court.

This is expected to happen quickly, as many of the titles are new releases that will quickly become “obsolete”.

All customer vouchers will be honoured. The Xtra-vision business has been in and out of insolvency on at least four occasions in recent years, including two examinerships, a receivership and the latest liquidation, the first time it entered insolvency under Hilco’s ownership.