Webprint to appeal order on security for costs in TCH case 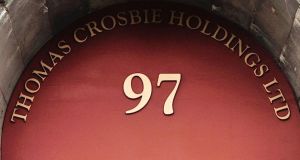 Webprint’s main legal action before the Commercial Court over the loss of its newspaper printing contract will not get under way until the Supreme Court has decided the appeal in relation to security for costs. Photograph: Daragh McSweeney/Provision

A printing company suing over the loss of a valuable contract to publish several newspapers in the former Thomas Crosbie Holdings (TCH) group and which has to put up over €3 million security for costs before its action can go ahead is to take its case to the Supreme Court.

Webprint Concepts Ltd indicated in court today that it intends to appeal a security for costs order by the High Court in its action over a 15-year printing contract.

The latest development means the main legal action before the Commercial Court over the newspaper printing contract will not get under way until the Supreme Court has decided the appeal.

Last week, Ms Justice Mary Finlay Geoghegan ruled defendants including Thomas Crosbie Holdings, Landmark Media and Thomas Crosbie and Alan Crosbie are entitled to orders for security of costs in the action taken by Webprint Concepts Ltd. The judge also dismissed the security for costs application of Thomas Crosbie Printers (TCP), ruling that TCP had not made out a prima facie defence to the substantial claims of Webprint.

The judge ruled that TCH; Bontury, trading as Landmark Media Investments; Thomas Crosbie; and Alan Crosbie had made a prima facie defence to the claims and were entitled to orders for security for costs. Webprint had not discharged the onus of establishing special circumstances for which orders for security in favour of the TCH defendants along with AIB, the receiver and The Irish Times should not be made against it.

Webprint has sued the parties in the Commercial Court over losing the contract as a result of what it alleges was the “wilful” and “pre-packaged” restructuring of Thomas Crosbie media group earlier this year.

All the defendants had applied for orders requiring Webprint to put up security for costs and the printing company opposed it on grounds including its financial difficulties arose from what it alleges was a contrived restructuring. The financial loss exceeds the alleged legal costs of €3.1 million, it claimed.

In court today, Ms Justice Finlay Geoghegan ordered that Webprint will have to put up €3.1 million for security for costs within the next three weeks. However, she put a stay on the order pending the determination of an appeal on the security for costs decision by the Supreme Court.

Ms Justice Finlay Geoghegan also awarded costs of the four-day security for costs hearing before the High Court to AIB, receiver Kieran Wallace and The Irish Times but made no order as to costs in relation to the TCH defendants, which means they will have to pay their own costs of the four-day hearing.