BHS collapsed in April with pension deficit of £571 million and loss of 11,000 jobs 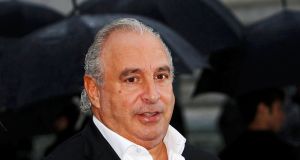 BHS ex-owner Philip Green: said he had already made a “credible and substantial proposal” to support BHS pensions, aiming to keep them from falling under the UK’s Pension Protection Fund. Photograph: Luke MacGregor/Reuters

Britain’s pensions regulator has formally begun “enforcement action” against Philip Green, the former owner of BHS, to plug a hole in the collapsed department store’s pension fund, saying the billionaire had failed to provide a credible offer.

Sir Philip is thought to have offered £250 million, £100 million less than the pensions regulator has demanded.

Sir Philip (64) owned BHS for 15 years before he sold the lossmaking 180-store chain to Dominic Chappell, a serial bankrupt with no retail experience, for £1 last year. BHS went into administration in April and the last of its stores closed in August. Some 11,000 jobs were lost.

Sir Philip, whose Arcadia group owns a string of fashion chains including Topshop, sold BHS with a hole in its pension fund which had ballooned to £571 million by the time it went into administration. If not filled, this will leave 20,000 BHS pensioners facing significant cuts to their income.

Sir Philip told lawmakers in June he would resolve the pensions issue and, in a televised interview last month, said there was some “light in the tunnel to a solution”.

BHS schemes However, the pensions regulator’s chief executive Lesley Titcomb said on Wednesday: “We are yet to receive a sufficiently credible and comprehensive offer in respect of the BHS schemes.”

Sir Philip countered, saying he had made a decent offer.

“I have provided the regulator with what I believe to be a credible and substantial proposal, with evidence and bank confirmation of cash availability, which would prevent the scheme from entering the Pension Protection Fund,” he said.

The regulator has now sent “warning notices” – statements of its case – to Sir Philip, his holding companies, Taveta Investments Limited and Taveta Investments (No 2) Limited, to Mr Chappell and to his vehicle Retail Acquisitions Limited.

Each notice runs to more than 300 pages and sets out the arguments and evidence as to why the regulator believes the respondent should be liable to support the BHS pension schemes.

The notices set out evidence to support the use of both the regulator’s contribution notice (CN) and financial support direction (FSD) powers. A CN demands a specified sum of money and an FSD requires respondents to put ongoing support in place for a pension scheme, which must first be agreed with the regulator. – (Reuters/PA)