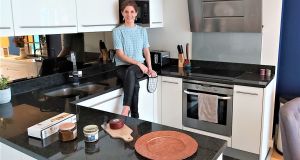 Ufurnish co-founder Deirdre McGettrick: “If you look at how Airbnb has grown across multiple geographies then I think we can mirror that”

Ufurnish, an Irish co-founded search engine for furniture, has upped its planned investment target to £10 million (€11.6 m) as it looks to expand locally.

The company had originally planned to seek £5 million from investors for its forthcoming Series A funding round, but has now doubled this figure in response to a surge in business arising from the Covid crisis.

Ufurnish has partnered with more than 100 retailers, including well-known names such as Habitat, John Lewis and French Connection, to provide more than one million products for sale via its platform.

With most of Britain under lockdown over the past year, households have turned their focus to doing up their homes, resulting in huge growth for Ufurnish.

The company which closed an early-stage £1.8 million investment from backers that include Dalata founder Pat McCann last year, raised an additional £500,000 from existing investors last month. It is now looking to secure a further £10 million ahead of a planned move into the Irish market by the end of 2021. The company has already started hiring locally, with plans to take on 10 people.

Ms McGettrick, a former City of London investment banker, said she got the idea for the business after struggling to buy furniture online for her apartment.

“I was shocked at how difficult it was to buy online and that spurred me to do something about it,” she told The Irish Times.

“As we’ve seen with the closure of big retailers such as Debenhams, the situation has changed now with the high street moving online. With more people stuck at home for long periods of time due to the pandemic, many are looking to renovate.”

Ufurnish, which last year won the New Entrepreneur of the Year prize at the Lloyds Bank National Business Awards, sees itself as not just helping consumers but also businesses. She cites by way of example, Irish retailer The Sleep Shop, which is selling to British customers via the platform without having to incur the costs usually associated with expanding into other markets.

With Britain’s furniture market valued at £11.9 billion there are growth opportunities for the company. Yet Ms McGettrick said she was keen to see the company expand its marketplace to Irish customers by the end of 2021, and further afield in the coming years.

“If you look at how Airbnb has grown across multiple geographies then I think we can mirror that,” she said.