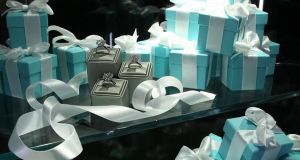 Tiffany & Co has raised its profit forecast for the second time in less than six months, after sparkling second-quarter sales in the Americas and Asia Pacific boosted the US luxury jeweller’s earnings by 16 per cent.

Shares in Tiffany rose 3 per cent in early trading after it raised its 2014 earnings guidance to between $4.20 and $4.30 a share. The revised expectations, up from its previous forecast of $4.15 to $4.25 a share, were attributed to a 7 per cent surge in total global sales to $993 million.

Consumers have responded positively to revamped stores and product offerings, particularly to the group’s gold-focused and wedding collections, the company said. Buoyant demand allowed Tiffany to raise prices, lifting its gross margin from 57.5 per cent to 59.9 per cent.

In the Americas, same-store sales, a key measure for retailers, jumped 8 per cent in the quarter to July 31st. In Asia-Pacific, they climbed 7 per cent, with demand from consumers particularly strong in China and Australia.

The group added that its strong performance in those regions had more than offset weaker than expected sales in Europe, with a strong pound and euro and slowing tourist traffic in core cities such as London. In Japan, sales tumbled 16 per cent, although this was expected following the country’s sales tax increase that took effect on April 1st.

“The business is in pretty good shape, with healthy returns emerging from management’s decision to elevate its brand positioning and establishing a bigger presence in new growth markets – despite an ongoing dependence on the Americas,” said Rahul Sharma, analyst at Neev Capital. “They appear to be on track for a good holiday season.”