The rise of Kylemore from bakery to catering and beyond

From a childhood packing cakes to expanding the group into the UK, chief executive Brian Hogan has changed more than the name at Kylemore 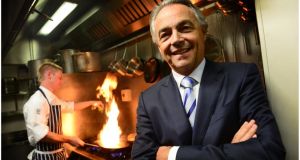 Brian Hogan started working at Kylemore at just 10 years old. Some 50 years later he is still there, having made the transition from packing cakes to running the company. “I wasn’t very good at school so I much preferred to be packing Christmas cakes and mince pies. I really wanted to leave school and go into the business but wasn’t allowed.”

His dislike of school stemmed from a hatred of sitting at a desk, something he tries to avoid to this day.

Founded in 1920 by his grandfather, KSG started as a dairy. The company changed to baking and confectionary when Hogan’s grandmother, spotting a gap in the market, decided to take advantage of the thousands of fans descending on Dublin for the all-Ireland final one Sunday. She baked some cakes, displayed them in the window and Kylemore bakery was born.

Hogan started full-time at the business in the 1970s after leaving college where he was studying commerce. In 1980 he became chief executive and nine years later, with seed capital from a property transaction and backing from AIB, he bought the company.

In 1987, Kylemore opened its cafe on O’Connell Street, with 14 more restaurants to follow. While some have since closed, the company now has 11 casual dining restaurants around Ireland, serving three million customers a year.

The bakery business on the other hand was not to be, being usurped by the advent of frozen and par-baked breads. Hogan ultimately decided to close it in 2002 with the loss of more than 300 jobs.

“Of the 300 people that we let go, every one of them had found a job as good or better by the time their four-week notice period was over. It was not easy telling them we were closing the bakery, though.”

With rents doubling in 2002-2003 in shopping centres and on main streets, Hogan decided to move into contract catering. “We opened a restaurant in the Pavilions Shopping Centre in Swords. It was 5,000sq ft and the rent was circa €100,000. Two years later we were quoted the same price to rent a small sandwich bar in Athlone. We went back to our guys and said, this is bonkers. We stopped signing leases, thankfully, at that time and decided to make the move into catering.”

The More with Food division of the company provides catering services to a range of clients including universities, hospitals, government departments, hotels and tech firms.

“We struggled to get chefs who were trained the way we wanted, so we set up our own training academy in our head office in Finglas. We are the only catering company to have our own Fetac-accredited training centre which we run for all our chefs, managers and baristas. We’ve just won a 2013 outstanding achievement award from the Irish Institute of Training and Development.”

Name change
Contract catering now accounts for 90 per cent of the business, resulting in Hogan changing the company’s name from Kylemore to KSG (Kylemore Services Group). That said, he is looking to move back towards restaurants.

“Part of the process of reinventing ourselves is that we have come up with three or four amazing retail concepts.

“We have a fresh handmade burger operation in Liffey Valley called Moo. We are going to change its name, but it’s trading really well, so we want to open it on the high street. We are actively looking for sites.

“We also have a new coffee and bar product called Leopold which is launching in Dublin Airport at the end of September.”

He says rents and landlords are more reasonable and realistic in their expectations now, which is party why the company is returning to retail and the high street.

“We were very pleased when we found out, in one of our leases, we had the famous Bewley’s clause, so we were particularly excited about that judgment.

“The lease didn’t use the words “upward-only” or didn’t refer to any other base rent than the original base rent. Two of our very bad legacy leases expire in December and we will renew them at lower rents or leave.”

In 2010, Hogan and Michelin-star restaurateur Patrick Guilbaud combined their experience to create a new dining business called Two and You. The division of KSG provides hospitality and dining to corporate clients. “I’ve been friends with Patrick for 30 years. We were on a skiing trip and I told him I wanted to target the top technology companies, high-end banks, accountancy practices and law firms.

“He told me he’d been approached many times by his restaurant clients, particularly chief executives, who wanted him to do food and events but he didn’t want to close the restaurant.”

A year later the food venture was up and running. It is a good combination as KSG has the scale to deliver on big contracts day in, day out, while Guilbaud caters to the diners, coming up with a constantly changing seasonal menu.

“We worried about mixing business and friendship. We talked through all the potential pot-holes on the road and came to various agreements.

“We have a very lucid structure so, if one of us wants to leave or there’s a fall-out, there’s a method in place. Hopefully that won’t happen.”

That same year, the group recorded pre-tax losses of €1.4 million due to impairments. “They were all writing down the asset value of the restaurants that had impaired leases.

Things have since improved, and last year the company enjoyed pre-tax profits of €1 million on a turnover of €39.1 million.

UK move
Hogan says the company’s next move will be into the UK, adding that it is much more readily transferable to that market than it was in previous years.

“We would hope to buy a small catering company over there. If not, we will start up on our own. Some of our clients in Ireland have operations in the UK, so maybe they will take our relationship with them here to the UK.”

He says staff and fresh food are the secret to the company’s success.

“We take a team once a quarter to cities such London, Paris, New York, Chicago and Seattle. We eat our way around the places for several days trying things and getting ideas.

“We buy locally and deliver daily. It’s definitely more expensive but the result is you get fresh food. We promote having small kitchens, with preferably no deep freeze, so everything is fresh.”