Tesco’s travails a blood sport as rivals milk it

Tesco’s unfortunate buttermilk carton is the least of its woes 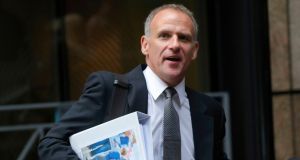 Watching the very public travails of Tesco these days is akin to a business blood sport. It’s like looking at a former schoolyard bully – after he has lost his fear factor – being happy-slapped in revenge by all the other kids. It’s hard not to feel for it.

As if its plummeting market share and the criminal probe into its UK parent’s accounting practices wasn’t bad enough, Tesco Ireland shot itself in the foot this week with a rather unfortunate phallic-looking artwork design on its own-brand buttermilk cartons.

The result? Online humiliation and a barrage of Tesco toilet jokes. It’s all up on Twitter, if you want to join in.

Dave Lewis, the new chief executive of the parent company, is playing it coy on his turnaround strategy for the group. It will be revealed in time, he says.

Time is running out for Tesco in Ireland, its most important market in Europe after Britain. The chain is in imminent danger of losing its crown as the largest grocer in the State.

The latest Kantar Worldpanel market shares figures revealed this week, for the 12 weeks to mid-October, put Tesco at 25.1 per cent, down from 26.5 per cent.

SuperValu, which is beginning to find itself after swallowing Superquinn, is at 24.6 per cent, and holding firm.

The German discounters Aldi and Lidl are at a combined 16.6 per cent. At their current rate of growth – 14 per cent – they could deliver the top-dog crown to SuperValu early next year.

Does anyone know what Tesco stands for anymore?

It has lost the war on price with the German discounters. SuperValu does the “community” thing far better and it is learning the Superquinn quality game.

Dunnes Stores, meanwhile, has walloped its rival with vouchers and mercilessly plays the Irish card against its British rival.

Mark Price, chief executive of Tesco’s UK rival Waitrose, recently said the big weekly shop – the type of thinking that drove the building of big, out-of-town Tesco Extras – “is a thing of the past”.

Analysts have identified the structural change in the market, where customers shop little and often in several stores with little brand loyalty, as “repertoire shopping. Others call them “promiscuous shoppers”, although I bet Tesco’s buttermilk is their favourite.

Things might not get easier anytime soon in the Irish market. Iceland and Eurospar are planning to push into the market to capture more repertoire shoppers in coming years.

Tesco, one of the world’s finest retailing companies, needs to dig deep to regain its strength here.

European stocks and US futures tumble again over coronavirus fears