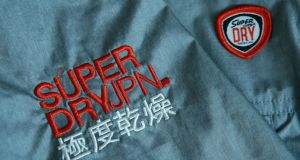 SuperGroup, the British company behind the Superdry fashion brand, is well placed to weather sterling’s depreciation in the wake of the Brexit vote thanks to its overseas expansion strategy, its boss said on Thursday.

The firm, whose trademark jackets, hooded tops and jogging bottoms are popular with teenagers and twenty-somethings, has more than 660 stores and concessions across more than 50 countries as well as an ecommerce business.

“The strategy remains unchanged largely because it was one of diversification by channel, by geography and by category,” chief executive Euan Sutherland said after the firm reported a 16.3 per cent jump in full-year profit and paid a first special dividend, sending its shares up to 18 per cent higher.

The pound has tumbled to 31-year lows against the dollar since Britain voted on June 23rd to leave the European Union. Mr Sutherland said SuperGroup is hedged for the next 18 months but will eventually face higher sourcing costs if the weakness of sterling persists as about half of the goods it imports are paid for in dollars.

However, the firm will benefit from a positive sales translation effect because 55 per cent of its revenue is generated outside the UK.

“I think relative to other players we’re better placed,” the chief executive said, noting that SuperGroup’s overseas exposure is increasing.

“As we go into this financial year, it’s slightly lower in Europe but the remaining percentage is in the US, so we’re not really opening any more space in the UK,” said Sutherland.

SuperGroup made a pretax profit of £73.5 million (€88 million) in the year to end-April. That was at the top end of previous guidance. Full year revenue increased 21.3 per cent to £590.1 million after fourth quarter revenue jumped 30 per cent.

The firm is paying an ordinary dividend of 23.2 pence and a special dividend of 20 pence reflecting “high confidence in our brand and our strategy”.

Shares in SuperGroup, which had fallen 18 per cent so far this year prior to Thursday’s update, were up 224 pence at 1,565 pence, valuing the business at £1.27 billion.