BWG says it is committed to retaining and promoting Londis brand 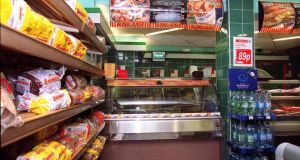 BWG, which announced 1,200 new jobs as part of a €100 million investment in October, has 421 Spar stores and an estimated 35 per cent share of the Irish convenience store market. Photograph: Dara Mac Donaill/Irish Times

BWG, the company behind Spar in Ireland, is to acquire rival ADM Londis for €23 million.

Completion of the offer is subject to shareholder approval and Competition and Consumer Protection Commission clearance.

Londis’ board members who are shareholders have already confirmed they intend to accept the offer in respect of their shares.

Londis, which has been operating in Ireland for more than 60 years, is an independently owned group that operates 200 stores across the country. It reported sales of €195 million in 2013.

“At Londis we’re keen to continue a journey that has seen the group drive efficiency and service whilst delivering value for customers and protecting retailer margins. We believe that being part of a global business of scale would further enhance competiveness for consumers and franchisees,” said chief executive Stephen O’Riordan.

BWG said on Friday it is committed to retaining and promoting the Londis brand and to investing in its future growth and development.

BWG was originally formed by the amalgamation of four indepedent wholesale companies in the 1970s. It currently employs about 1,000 staff directly and about 20,000 people in its stores, including owner-run franchise outlets.

The group, which announced 1,200 new jobs as part of a €100 million investment last October, has 421 Spar stores and an estimated 35 per cent share of the Irish convenience store market with turnover of about €1.2 billion.

Overall, it runs 1,175 Spar, Eurospar, Mace and XL stores throughout Ireland and the South West of the UK. The group sold an 80 per cent stake for €55 million to Spar South Africa last year.

Chief executive Leo Crawford said the offer for Londis was consistent with BWG’s strategy for growth. He said the group believes a deal will bring significant benefits to Londis’ retailers in terms of shared purchasing, marketing, and innovation in areas such as store formats and fresh food.

“We are excited about the opportunity to grow the Londis brand in conjunction with our existing portfolio of market leading convenience brands. Through our partnership with Spar South Africa, BWG has ambitious plans for investment and expansion and we would warmly welcome Londis retailers into our business where they can be part of our future success”.