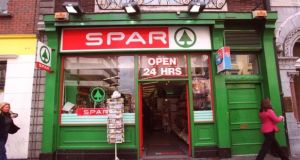 South African retail group Spar has announced first-half profits after tax that were 22 per cent higher as it included results from its Irish unit for the first time.

BWG, the group behind Spar in Ireland, sold an 80 per cent stake for €55 million to Spar South Africa last year.

Headline earnings per share (EPS), which is the main profit gauge in South Africa, rose 22.4 percent to 455.5 cents.

Spar said trading results for its Irish unit, which is the group’s fifth biggest division by turnover, were in line with expectation.

“The Irish retail market continues to show encouraging signs of recovery, as the economic recovery has been confirmed. Although increased consumer spending has yet to materialise, imminent tax reductions, increased levels of employment and reduced mortgage costs are expected to buoy consumer demand going forward.

BWG/Spar has more than 900 stores in Ireland and about 280 in Britain. The latest results show turnover at Spar’s Irish unit totalled 7.66 billion rand (€577.3m) in the first half.

BWG announced plans to acquire ADM Londis for €23 million in January. BWG said at the time it was committed to retaining and promoting the Londis brand and to investing in its future growth and development.

Spar said the timing of the BWG acquisition will likely impact on revenue growth performance in the second half.

The Spar Group is part of Spar International, which operates in 40 countries, 10 of which it entered into for the first time last year as it seeks to expand outside its home base.

1 Ryanair and Eir the worst for customer service during Covid crisis
2 Irish elearning company LearnUpon closes €47.4 million investment
3 ‘Essential’ retailers risk a firestorm if they exploit the closure of the ‘non-essential’
4 Economists warn that GDP will fall again over Level 5 restrictions
5 Fair deal? Family at odds with hospital and each other not so sure
6 Aldi to impose limits as Christmas toys go on sale
7 PlanNet21 eyes further acquisitions after buying rival eCom
8 What to consider if older person or loved one needs care at home
9 Tinnitus group Neuromod raises €10.5m for expansion
10 Businesses call for more supports amid ‘devastating’ restrictions
Real news has value SUBSCRIBE