Sales up 1.3% in August with consumers moving offline to spend in physical stores 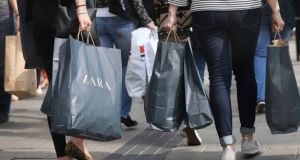 With stores reopening, the proportion of online sales has fallen from a high of 15.3% in April to 4.4% last month

Retail sales rose 1.3 per cent in August and were 9.1 per cent higher versus August 2019, new figures show.

Data from the Central Statistics Office (CSO) indicates retail sales were 8.9 per cent higher than in February, before the impact of the coronavirus pandemic was felt locally.

However, some sectors have been slow to recover with bar sales down 42.1 per cent and sales of books, newspapers and stationary 13.3 per cent lower. Fuel sales were also down 5.6 per cent while department stores were 5 per cent lower.

When car sales are excluded, the volume of retail sales was up 1.1 per cent in August compared to July, and 6.5 per cent higher than the same month a year earlier.

The amount spent by consumers rose by 0.5 per cent in August than in July and was up 6.8 per cent versus the same month in 2019. Excluding car sales, the value of retail sales was 0.4 per cent and 2.2 per cent higher respectively.

With stores reopening, the proportion of online sales has fallen from a high of 15.3 per cent in April to 4.4 per cent last month.

The largest increases on a monthly basis was in books, newspapers and stationary, where sales rose 22.5 per cent when compared with sales in July. Bars were 18.1 per cent higher while department stores rose 12.9 per cent.

Annually, the volume of sales in bars was 42.9 per cent lower, with books, newspapers and stationary down 13.3 per cent year-on-year.