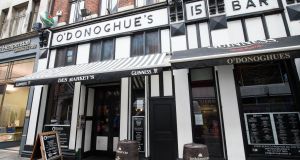 Receivers are entitled to an injunction requiring a publican to vacate a Dublin city centre premises so it can be used to help pay off a €6 million debt, the High Court has ruled.

But Mr Justice Michael Twomey put a stay on the order relating to O’Donoghue’s in Suffolk Street on condition that the rent on the premises is paid.

Markey Pubs Ltd, owned by Des Markey, claimed that, under his lease of O’Donoghue’s in Suffolk Street, receivers Martin Ferris and Patrick McCoy were not entitled to the injunction because Markey Pubs was entitled to a new tenancy.

Markey Pubs said the injunction forcing it to vacate should not be granted pending determination of Circuit Court proceedings in relation to the tenancy.

Markey Pubs had claimed the lease was from a company of Edward O’Donoghue who, along with a number of his corporate vehicles, was advanced loans of €9.4 million in 2004-2005 by Irish Life and Permanent (IL&P). The liabilities were guaranteed by a company called Thingmote and by personal guarantee, it was claimed. Thingmote is the owner of the premises.

On Thursday, Mr Justice Twomey said there was a “truly extraordinary” aspect to the Markey claim in relation to what he said was a “sham lease” of 2013.

He said Thingmote is the parent company of a firm called EOD Investments and Thingmote executed security for the IL&P loan to EOD. The loan was later sold by IL&P to Havbell which appointed the receivers when it was not repaid.

There was a connection, therefore, between the owner of Markey, as pub tenant, and the owners of EOD which borrowed the funds and which was owned itself by Thingmote.

It was also relevant that Mr Markey was a director and co-owner, with his former wife, of a company called San Benedetto, which was the tenant of the premises until the purported assignment by EOD of the lease to it (San Benedetto) in 2013 for a period of 10 years.

The reason this was extraordinary, the judge said, was because EOD never, at any stage, owned the property. At the time the sham lease was assigned, Mr Markey was majority shareholder in EOD which owed €6 million on the original IL&P loan. The recipient of the sham lease, San Benedetto, was also controlled by Mr Markey.

Mr Markey became the sole shareholder of Markey Pubs when it was incorporated in 2016, the same year Markey Pubs became the beneficiary of the sham lease, he said.

The judge also said the High Court was entitled to exercise its full jurisdiction to decide whether there was in reality any merit to the claim for a new tenancy notwithstanding the general rule that the Circuit Court has exclusive jurisdiction of these matters.

If the court was to do otherwise, and allow proceedings with little or no hope of success to thwart or delay Havbell’s right to enforce the security for the loan, it would amount to an abuse of process, he said.

He therefore found the receivers were entitled to an injunction. However, the judge put a stay on the injunction on condition the rent be paid. He also noted Markey Pubs’ most recent accounts, in December 2017, showed a deficit and that it had made a loss in the most recent financial year.