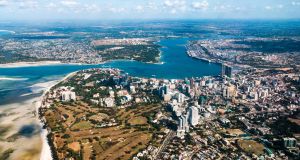 Dar es Salaam in Tanzania. The East African country is more than 10 times the size of the Republic, and has an estimated population of about 60m

Preparations are under way for an Irish trade mission to Tanzania following the establishment of a new business organisation that is hoping to encourage greater exports between the East African country and the Republic.

The Tanzania Chamber of Commerce in Ireland, whose backers include the Tanzanian government and Chambers Ireland, is calling on Irish businesses to look east towards what is one of the fastest growing economies on the African continent.

At more than 10 times the size of the Republic and with an estimated population of about 60 million, Tanzania is the largest country in East Africa.

“The relationship between Tanzania and Ireland traditionally has been in education and agriculture. As more Irish companies set businesses in Tanzania we see a need of this institution in co-ordinating the business activities of investors in both nations,” said Edna Lyatuu Hogan of the chamber.