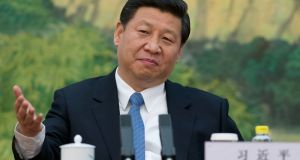 The files link nine of the country’s most prominent families, including a relative of president Xi Jinping, to secret offshore companies, mostly based in the British Virgin Islands. Photograph: Ed Jones/AFP/Getty Images

The Chinese government remained silent on Friday on revelations from the Panama Papers that the families of three of the seven people on the Standing Committee of the ruling Communist Party own or have owned secret offshore companies.

The files link nine of the country’s most prominent families, including a relative of leader Xi Jinping, who is General Secretary of the Communist Party, head of the Military Commission and president, to secret offshore companies, mostly based in the British Virgin Islands.

The Panama Papers do not identify wrongdoing by Mr Xi or other leaders, but the notion of large sums held overseas by family members sits uneasily with the Communist Party’s stated aim of narrowing the wealth gap and promoting equality.

The disclosures by the International Consortium of Investigative Journalists are not exactly new to most people in China, who are aware that the families of the elite amass large fortunes.

However, the documents flesh out the reports and are an embarrassment to the leadership, especially during a major crackdown on corruption that so far punished over 300,000 party officials.

The cache of documents leaked from Mossack Fonseca, a Panamanian law firm that sets up tax shelters and shell companies for wealthy clients have gone unreported in the official media. The only significant exception was an editorial in the English-language edition of the Global Times, which is part of the stable that publishes the official organ, the People’s Daily, saying the findings were part of a broader Western conspiracy.

The only official response has been a line from the foreign ministry describing the consortium’s findings as “groundless”, and censors have kept a tight muzzle on any online references. Any Internet searches for “Panama Papers” are fruitless and online discussions about the issues are banned.

The documents show that the families of three supreme leaders - Mr Xi, and two deceased predecessors, Hu Yaobang and Mao Zedong, were linked to offshore companies.

The news about Zhang Gaoli and Liu Yunshan is particularly interesting as they are said to be rivals of Mr Xi and reveal that different factions within the Communist Party have profited from the activity.

Mr Zhang is Vice Premier his son-in-law was a shareholder in three companies domiciled in the British Virgin Islands, while the daughter-in-law of Mr Liu, China’s propaganda chief and the successor to the now-disgraced Zhou Yongkang, was once a shareholder and director of a company registered in the same tax shelter.

The revelations have also spread to China’s rival, self-ruled Taiwan, where Tsai Ying-yang, the older brother of Taiwan President-Elect Tsai Ing-wen was named as setting up an offshore company in 2008.

His lawyer said he had done nothing illegal, but the news has led to criticism from Ms Tsai’s political rivals.

Panama is one of just 22 countries, including the Vatican, which maintain formal diplomatic ties with Taiwan, with most countries in the world recognising the People’s Republic of China.