Bill Bratton’s new role, after 45-year career in US policing, will focus on security issues 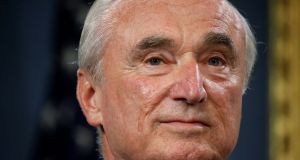 The new division will be responsible for advising clients in the areas of cyber risk and security, data protection, crisis response and anti-terrorism preparedness among others.

While remuneration details have not been released, the appointment follows Mr Bratton’s high-profile departure from his command of the NYPD and the close of a 45-year career in public life.

Teneo Holdings was co-founded by Mr Kelly, a former business journalist and graduate of NUI Galway.

“In a world of increasing uncertainty and instability, CEOs and business leaders are now, more than ever, looking for advice on critical risk and security issues from trusted, proven experts,” Mr Kelly said of the appointment.

“Commissioner Bratton brings unparalleled expertise that will benefit our clients around the globe.”

Mr Bratton’s departure from policing was announced on Tuesday. He was described in the New York Times as a leader who “reshaped the image of what a police commander could be”.

The end of his tenure comes at a time of significant pressure on police forces in the US following a number of scandals and New York is no exception.

The city is the subject of an ongoing federal corruption investigation while charges are still being considered regarding the 2014 death of Eric Garner who had been held in a choke hold by an officer.

Commenting on his new career path, the two-time police commissioner said: “I look forward to bringing my experience to bear as I develop Teneo Risk and help the firm’s clients address a range of important issues.”

1 Bank leaked my loan request to family who tried to rip me off
2 Coronavirus: Irish holding back on holiday plans
3 Digicel’s earnings rise as it looks towards refinancing $1.3bn of bonds
4 Fuel company loses €1.35m challenge over tax bill in ‘green diesel’ case
5 BidX1 to offer more than 50 lots for auction today
6 Ryanair and Aer Lingus monitor impact of coronavirus on travel to Italy
7 How can I view my dead brother’s will if I’m not the executor?
8 Eason acquires rival Dubray Books for undisclosed sum
9 Don’t buy online DNA ancestry tests. You are the real product
10 Takeda selling off its Dunboyne facility
Real news has value SUBSCRIBE