No sequel as final credits roll for Xtra-vision 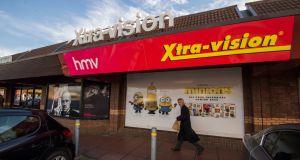 The liquidator appointed by the High Court on Wednesday is clearing out Xtra-vision’s 83 stores and preparing to hand back the keys to landlords. photograph: dara mac dónaill

Xtra-vision, the movie rental chain that collapsed into insolvency this week with the loss of 580 jobs, has plenty of experience of going bust, having done so on three prior occasions since the 1990s.

This time, however, it appears there will be no sequel for the chain, which is owned by retail restructuring firm Hilco Capital. As happened with its industry rivals Laser and Chartbusters in recent years, the end credits are rolling.

The liquidator appointed by the High Court on Wednesday is currently clearing out its 83 stores and preparing to hand back the keys to landlords.

Michael McAteer, the Grant Thornton insolvency partner who has been appointed to oversee Xtra-vision’s gory ending, is understood to have already issued the staff their P45s.

He promised on Friday that the documents for workers’ pay claims, to include statutory redundancy and notice of between one and 12 weeks depending upon length of service, would be processed “as quickly as possible”.

An estimated €6 million of stock held throughout its store network is being brought to a central warehouse in Dublin. That process is expected to be finished by the end of next week.

The majority of the stock is held on consignment, so the suppliers will likely just take it back in lieu of making claims.

Revenue is mostly paid up, with the exception of VAT for November and December, and employers’ PRSI for the Christmas period. It is estimated there was about €200,000 cash in Xtra-vision’s tills when it entered liquidation.

Filefigure 30, a UK-registered Hilco company that was funding Xtra-vision, is owed an estimated £5 million, according to its financial statements. Documents filed with the High Court last week show it was sweeping Xtra-vision’s accounts on a daily basis.

Hilco Capital, the retail restructuring company that bought Xtra-vision for €5.5 million in 2013, knew it was taking on a challenge. With the advent of online streaming, its future seemed bleak even then, but its past was just as colourful.

The business, founded in 1981 by courier Richard Murphy, floated on the stock exchange in the late 1980s but by 1990 it was in trouble with its banks. It took on new investment but by 1993 it stumbled into examinership for the first time.

Under new ownership it continued until 1996, when it was bought by Blockbuster, which sucked cash from Xtra-vision until, in 2009, it was sold back to Irish investors led by former chief executive Peter O’Grady Walshe.

In 2011 it entered examinership again, securing rent cuts from its landlords and fresh investment of €6 million from its owners.

Two years later it was bust again and Hilco bought its assets from a receiver for €1.7 million less than their book value.

Hilco, the owner of HMV, which is unaffected by the liquidation of Xtra-vision, told the court last week it always knew the movie rental business had no long-term future, except, perhaps, as a “niche player”.

Half came from movie sales and rental, with the rest from games and music.

By last September, Xtra- vision was €2 million behind budget, and Hilco triggered break clauses in 20 stores, which were due to shut this weekend.

When sales in December, traditionally the busiest month, fell by a quarter, Hilco, through Filefigure, pulled the plug and declined to fund it any longer.

Hilco is unlikely to have made its money back on Xtra- vision, despite annual interest on its loans to Filefigure and a €1 million facility “arrangement fee”.

Hilco has emerged with access to the brand name, however, and separately owns an Xtra-vision DVD vending machine service, which is not part of the liquidation.

The Xtra-vision website and online sales service is also still operational, and appears to be run by HMV.

A meeting of creditors will be held next month to confirm McAteer’s appointment.

Not too long after that, it seems, the curtains will come down for the last time on a company that is out of cash, out of chances and, due to the internet, seriously out of date.