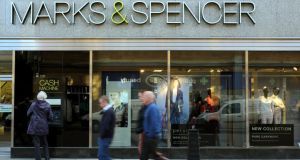 Marks & Spencer posted a worse than expected 5.8 per cent drop in underlying sales of clothing, gifts and homeware in its Christmas quarter, exacerbated by online delivery problems.

The performance was a fourteenth consecutive quarterly decline in general merchandise sales for the British retailer, far underperforming analyst expectations for a 3 per cent drop.

“We had a difficult quarter in general merchandise, dominated by unseasonal conditions and an unsatisfactory performance in our e-commerce distribution centre,” chief executive Marc Bolland said in a statement on Thursday.

M&S had said in December its new online distribution centre was struggling to cope with demand in the run-up to Christmas, resulting in no next day deliveries and longer waits for customers.

The retailer has failed to stem declines in general merchandise which started four-and-a-half years ago, a period during which shoppers have become more cost-conscious and turned away from traditional stores towards the internet and discount chains.

It said a 0.1 percent rise in like-for-like food sales in the period outperformed the grocery market but it was also lower than the 0.9 percent the market had expected.