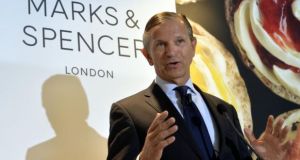 Retailer Marks & Spencer posted its first rise in annual profit in four years and said it would return excess cash to shareholders, fuelling hopes that it has finally rediscovered a successful formula.

Britain’s biggest clothing retailer, which also sells homewares and upmarket food, said on Wednesday it made a profit before tax and one-off items of £661.2 million in the year to March 28th.

M&S raised its dividend 5.9 per cent to 18 pence and announced the start of an ongoing programme of enhanced returns for shareholders with a share buyback of £150 million for the 2015-16 year.

“We are a more capable business following a sustained period of investment in our infrastructure and in our people,” said chairman Robert Swannell.

Shares in M&S, one of Britain’s best known high street shopping chains, have risen by a third over the last nine months, hitting an eight-year high on Tuesday.

The increase reflects hopes that the billions of pounds spent by chief executive Marc Bolland on the redesign of products, stores, supply chain logistics and its website is paying off and addressing decades of under-investment in the 131-year-old firm.

Mr Bolland, in the job since 2010, has focused on boosting profit margins. He delivered a rise in the 2014-15 gross margin for general merchandise - spanning clothing, footwear and homewares - of 190 basis points.

That was a reward for having sourced more goods directly from suppliers, spending less on promotions and concentrating more on full-price sales.