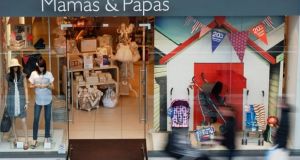 The retailer has made 73 staff redundant with immediate effect and has put 54 further jobs at risk within its head office.

Bluegem Capital, which has owned the business since 2014, has bought the company assets through a pre-pack administration which will cut some of its financial liabilities.

The administration, conducted by Deloitte, came after it was put under pressure as its shoppers moved online and high street footfall continued to decline.

Riccardo Cincotta, executive chairman of Mamas & Papas, said: “These actions are always difficult but they are also necessary in a challenging market to ensure Mamas & Papas achieves its considerable future potential.

“We remain fully focused on maintaining our position as the UK’s most popular nursery brand. – PA