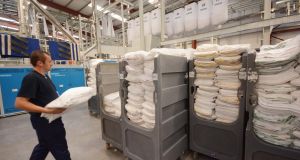 Kings Laundry, a major supplier of linen to hotels in Ireland, has been acquired by the French laundry services group Elis for an undisclosed sum.

The Tallaght-headquartered company, which was established in 2000, employs between 450 and 550 people, depending on the season.

Kings, which started out in the back of a shop in Dún Laoghaire servicing local restaurants, now supplies more than 50,000 hotel bedrooms. It generated revenues of €30 million in 2017, as against €23 million a year earlier and compared with €16 million in 2015.

Kings is believed to be generating earnings before interest, tax, depreciation and amortisation (ebitda) of €4.5 million. According to industry sources, deals in the sector would typically involve an ebitda multiple of between five and eight times ebitda.

This would value the Kings sale at between €22.5 million and €36 million.

It services about two million pieces of linen a week for close to 600 customers. Clients include the hospitality group Tifco, whose portfolio includes Clontarf Castle in Dublin, the Hilton Hotel in Kilmainham, the Metropole in Cork and the Travelodge chain of 12 properties.

The company opened a second plant in Little Island, Cork, as part of a €12 million investment in 2016.

The acquisition, which was described as “sizeable”, is subject to regulatory approval. It is expected to be completed by the end of 2018.

“This is a really positive development for us. Elis is a multiservice provider, so there are huge opportunities for us to branch out into other sectors,” Mr McGovern told The Irish Times.

“We are in a growing market and are constantly taking on more people and this deal will strengthen us further,” he added.

The deal is one of a number that have taken place in the sector lately. Rival Celtic Linen, which exited examinership in December 2016 after securing investment from Causeway Capital, acquired Millbrook Linen for an undisclosed sum earlier this year in a deal that created a €20 million entity.

Elis, which acquired UK rival Berendsen in a £2.2 billion deal last year, is an international multiservice provider offering textile, hygiene and facility services solutions. It operates across 28 countries and employs 45,000 people. The company reported revenues of €2.2 billion last year, up more than 40 per cent on 2016.

Elis already has a presence in Ireland through Berendsen, whose Irish subsidiary employs 550 people and reported turnover of €33 million in 2017.

“The acquisition of Kings Laundry is an additional step in our development in Ireland. The quality of Kings Laundry’s assets as well as the experience of its management team will facilitate the integration of the company, whose founder will become country chief executive,” said Xavier Martiré.