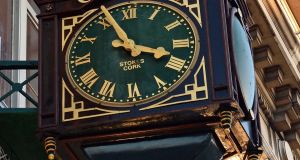 Mr Justice Robert Haughton directed solicitors William Fry to discover the material within 14 weeks but agreed to place a stay on his order in the event of an appeal.

The documents are wanted for upcoming disqualification proceedings brought under the Companies Act by the joint liquidators of the Clerys operating company – OCS Operations Ltd (Operations) – against two former directors of that company.

The joint liquidators – Eamonn Richardson and Kieran Wallace of KPMG – sought documents including material concerning the conduct of Operations’ affairs before Clerys was sold to Natrium just after 1am on June 12th, 2015. It was wound up hours later on an application to the High Court.

Operations is part of the OCS group. The former directors who are subject of the disqualification application – Rafael Klotz and Malcolm Mac Lennon Mac Aulay – deny they acted in breach of their duties as directors and insist they acted honestly and responsibly in the conduct of the company’s affairs.

Frys, represented by Declan McGrath SC, had argued its client was not Operations and it was instead instructed by OCS Investment Holdings Ltd and US-based Gordon Brothers, the parent and ultimate parent of the OCS group.

Because the two latter companies had refused to consent to discovery concerning Operations, the firm was not legally entitled to discover documents that might, in addition to referring to Operations, also touch on affairs of the OCS group, it argued. Imogen McGrath, for OIHL, also opposed the discovery sought.

James Doherty SC, for the liquidators, maintained Operations had been a client of William Fry and had paid the firm more than €735,000 for work done. The firm had advanced “technicality upon technicality” in opposing some of the discovery sought, he argued.

During the hearing, the judge was told by Mr Doherty that no substantial monies were expected to be realised from the liquidation of Operations. There would be substantial legal costs and fees of the joint liquidators, the court heard.

In his ruling, Mr Justice Robert Haugthon said he was satisfied there was at the very least an “implicit acknowledgement” that Operations was a client of Willaim Fry and the firm acted not just as solicitors for the OCS group but all entities within that group during the relevant period from September 2012 to June 2015.

Correspondence also seemed to acknowledge that Willaim Fry acted for Operations up to June 12th, 2015, and only ceased to act after that date, he said. Operations also paid €735,000 to Frys between September 2012 and December 2014 and invoices and other material set out in some detail that much of the work done by William Fry was on behalf of the Operations rather than for the OCS group.

The fact it was said the client was OIHL and it was on its instructions that fees were divided between the OCS companies does not alter his conclusion that Operations was a client and the bulk of work done was on behalf of Operations, he said.

He held the liquidators were prima facie entitled to discovery of documents under a number of categories, including all files and documents relating to the sale of the OCS group. The documents could only be used for the disqualification proceedings unless the court directed otherwise, he stressed.

The judge said he accepted the firm had provided some documents under other categories and also considered it was “caught in the middle” in this application due to the refusal of OIHL and Gordon Brothers to agree to discovery. He was also told earlier the liquidators were not pursing documents under some categories.

In the “special circumstances” of this application, including that it had raised novel legal issues due to Frys being solicitors for more than one company in the OCS group, he refused to make an order for costs of the discovery application against the firm and directed each side pay their own costs of that.