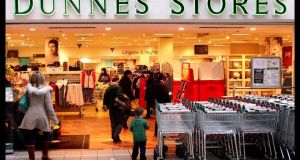 The receivers had claimed the €15.5 million was due under a 2010 settlement between Dunnes and Point Village Development Ltd

Dunnes Stores has lost its appeal over orders requiring it to pay €15.5 million to the receivers of a company of businessman Harry Crosbie so as to comply with agreed terms of settlement of a legal dispute concerning the planned Point Village development.

Dunnes was effectively asking the Court of Appeal to grant an “Alice in Wonderland” license to it to interpret words in the settlement as Dunnes wishes “depending on the result they sought to achieve”, Ms Justice Máire Whelan said.

The receivers had claimed the €15.5 million was due under a 2010 settlement between Dunnes and Point Village Development Ltd (PVD) negotiated by PVD chairman Mr Crosbie before NAMA appointed joint receivers over the company in 2013 on foot of a €450 million debt.

PVD brought proceedings in 2009 alleging Dunnes had failed to honour a 2008 agreement reached as part of a deal under which Dunnes was to become the main, or anchor tenant, in the centre.

Dunnes denied the claims and counterclaimed PVD had not complied with some of its obligations under the agreement.

The case settled at the High Court in 2010 but further disputes arose and the sides later negotiated supplemental terms of settlement.

The 2010 settlement provided PVD was released from obligations to construct an “iconic” 39-storey Watchtower and a Spine Building intended to house the U2 Experience museum.

The agreement also varied terms of the lease to Dunnes and reduced a €46 million sum Dunnes had contracted to pay for the site to €31 million, which latter sum was placed in a nominated account.

Dunnes paid PVD some €11.8 million from the nominated account in late 2010 but made no further payments.

In 2013, after joint receivers were appointed over certain assets of Mr Crosbie and PVD, the receivers engaged with Dunnes concerning completion of matters outstanding under the development agreement for the centre and the settlement agreement.

PVD argued it had complied with its obligations under the settlement agreement and Dunnes had to release some €15.5 million, plus accrued interest, to it.

Dunnes argued, among other claims, PVD was required to secure “high end” tenants for units in the centre before Dunnes was obliged to release the monies.

Dunnes did not deny it was obliged to release sums payable under clauses of the agreement but argued it was “inappropriate” to do so when the parties were otherwise in dispute.

Proceedings issued in which the High Court’s Ms Justice Caroline Costello was asked to decide what was required to satisfy the terms of the settlement agreement.

In a 2017 judgment, the judge upheld PVD’s claims it had met obligations under the settlement agreement and said Dunnes was obliged to release €15.5 million to Point Village “forthwith”, plus accrued interest.

Dunnes appeal against that decision was dismissed on Tuesday by a three judge Court of Appeal.

In a detailed judgment, Ms Justice Whelan said Dunnes had failed to demonstrate or establish manifest error in the construction and operation by PVD of the terms of settlement.

Dunnes claim was “wholly lacking” in any valid basis that would warrant the court exercising its exceptional discretion to admit extrinsic language to undermine the “very clear” language of the clauses in dispute, she said.

The substance of Dunnes contention distills to a claim the “perfectly clear” word “tenants” in the terms of settlement negotiated by the parties, “and signed off with extensive legal and expert advice”, should be construed to mean “tenants of a high quality”.

The COA also dismissed a separate appeal by Dunnes against a High Court refusal to direct that Dunnes could inspect certain documents concerning the agreements for lease.

1 In six months we will be in the grip of a 1980s-style recession
2 Angela Merkel sweeps in to save the euro zone
3 Property price drop of up to 12% this year a ‘reasonable’ assumption – McDonagh
4 Facebook looks increasingly immoral and thoughtless
5 Cork-based AI supply chain company Keelvar raises $18m
6 Mortgage approvals tumbled in first full month of lockdown – BPFI
7 Cycling made easier with an Irish-made electric bike
8 Ryanair to process all Covid-19 refunds within 10 weeks, Michael O’Leary says
9 Retailers ‘asked to work almost like hospitals’ during reopening
10 Chartered Land moves closer to approval for Dublin’s tallest tower
Real news has value SUBSCRIBE