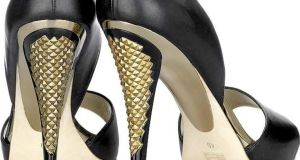 Jimmy Choo, which was acquired by private-equity investors three times before being bought by JAB in 2011, sells women’s and men’s shoes, handbags and accessories in more than 100 stores around the world. Its eponymous founder left the design house in 2001.

Jimmy Choo, the luxury shoemaker owned by JAB Holdings, may begin its initial public offering in London as soon as this month amid rising demand for expensive footwear.

It’s understood that JAB could announce plans to sell a 25 per cent stake in the maker of $1,995 Lust peep-toe sandals and could seek a valuation of about $1 billion. No final decision has been made and JAB may decide not to proceed with an IPO.

Jimmy Choo, which was acquired by private-equity investors three times before being bought by JAB in 2011, sells women’s and men’s shoes, handbags and accessories in more than 100 stores around the world. Its eponymous founder left the design house in 2001.

Jimmy Choo would follow luxury companies including Moncler SpA, Brunello Cucinelli SpA and Salvatore Ferragamo SpA in selling a stake on the stock market to fund expansion. Shares in Moncler advanced 47 per cent on the Italian skiwear maker’s first day of trading in December.

Cucinelli, a maker of $3,195 cashmere cardigans, and Ferragamo, which sells $675 patent-leather platform heels, have more than doubled since they were listed in Milan in 2012 and 2011, respectively.

Initial public offerings of retail businesses have surged in London this year. Discount online clothier Boohoo.com Plc rose 40 per cent on its first day of trading on March 14th. Pets at Home Group and Poundland Group, a discount retailer, have also sold shares to the public this year.

JAB reorganised its business in June, bringing brands including Jimmy Choo and jacket-maker Belstaff under direct management in a move it said reflected an increasing commitment to luxury goods. Luxury consumption is shifting as supply increases. While the world’s largest luxury brands such as Louis Vuitton and Gucci are struggling to reconcile their global presence with increasing demand for exclusivity, others such as Yves Saint Laurent and shoemaker Corthay are benefiting from being less widely distributed.