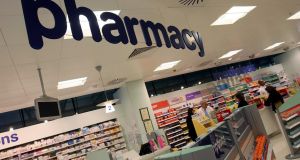 Figures from major Irish retailers suggest their workers are not being infected with coronavirus at a higher rate than the general population. File photograph: Alan Weller/Bloomberg via Getty Images

Figures from major Irish retailers suggest their workers are not being infected with coronavirus at a higher rate than the general population. The figures cast doubt on concerns that shops could be hotbeds of Covid-19 infection.

As the Government contemplates implementing further anti-virus restrictions this week, including restricting non-essential retail at Level 4 or 5 of the Living with Covid plan, major retailers such as supermarkets are reporting infection rates among their staff below the 1 per cent national rate.

Where infections have occurred, some retailers have moved to temporarily shut stores. The Irish Times has learned that pharmacy chain Boots temporarily closed its Dundrum Town Centre outlet this month following an infection there, with staff drafted in from elsewhere in the city to provide cover as Dundrum staff were sent home to restrict their movements.

By Sunday afternoon, there had been 48,678 confirmed cases of coronavirus in the State, almost exactly 1 per cent of the 4.9 million population.

Forecourts chain Circle K, which operates 160 outlets and has 2,300 staff, has recorded just seven staff cases in the past seven months of the Covid-19 pandemic, less than one-third of the national rate (its figures don’t include 250 independent traders that carry its brand).

Supermarkets, which have been operating at up to one-fifth beyond normal business levels right through the pandemic, have also not reported elevated rates. Tesco Ireland says it has had 96 cases among its 13,000 workers; Aldi has had 25 cases out of 4,000 workers, while Lidl has had 28 cases out of 6,000 staff, all well below the 1 per cent average.

BWG, which operates brands such as Spar and Mace, says it has had just 31 staff infection cases reported to it so far from 24,000 staff employed across its network, although there could be delays in receiving numbers from some of its independent retailers.

Outside of the grocery sector, the picture of low infection rates among staff appears to be the same. Bookstore chain Eason says it has had three staff infections out of a workforce of 600. Fashion retailer Penneys confirmed that “less than 1 per cent” of its 5,000 workers have tested positive, and “none of those cases are believed to have been contracted at work”.

Ikea says just five of its 700 workers in Ireland have tested positive since the pandemic began.

The latest weekly figures from the State’s Health Protection Surveillance Centre (HPSC) show that there has been 16 recorded outbreaks (meaning two or more infections) associated with retailing, out of a total of 4,957 outbreaks. There had been just one retail outbreak in the previous week.

Tommy Smyth, partner in Tom Smyth & Associates human resources consultancy in Cork, which advises members of industry group Retail Excellence, said the consultancy had received a slight uptick in queries recently from retailers worried about staff infections – “eight to 10 per week” – but it had not been a significant rise.

He said it is a more pressing issue for smaller retailers who may have to shut their store for a while.

Duncan Graham, chief executive of Retail Excellence, said retailers “have strictly followed all the Government advice and guidelines and invested heavily to ensure their premises are safe for staff and customers”.

“All retail should be categorised as essential, particularly at this time of the year, with nine weeks to Christmas. Any further [Level 4 or 5] restrictions would be devastating and would put 60,000 people” out of work, he said.