Irish business of Carluccio’s restaurants to be wound up

Restaurant chain expected to appoint a liquidator at creditors’ meeting 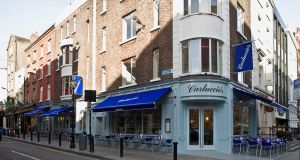 Carluccio’s on Dawson Street, Dublin: British newspapers reported that the Dawson Street restaurant was one of 31 outlets that the new owner intended keeping open.

The Irish business of restaurant chain Carluccio’s will be wound up next month following its British parent’s rescue by food magnate Ranjit Singh Boparan.

British newspapers reported that the Dawson Street restaurant was one of 31 outlets that the new owner intended keeping open. Another 40 will close. Carluccio’s Ireland employs about 60 people, according to its accounts.

It is understood that the company intends proposing to appoint accountant Jim McStay of Dublin firm McStay Luby as liquidator. The formal notice says the meeting will appoint a liquidator, but does not name any candidate.

The Irish division’s biggest creditor is the British parent. Accounts for the 12 months ended September 30th, 2018 show that Carluccio’s Ireland owed its owner €1.2 million. That was almost three times the €426,000 due to its parent a year earlier.

1 Belgium helps Ireland to a Brexit boon
2 ‘My rent here is so low it’s a joke’
3 Can Grafton Street stop the flood of closures?
4 This charming man: how Paschal Donohoe won the Eurogroup presidency
5 AIB to compensate another 1,100 tracker mortgage holders
6 Goodbody’s planned €155m sale to Bank of China falls through
7 Big Four told to outline plans for audit split in UK by October
8 Pharmaceutical industry signals it won’t extend drugs agreement
9 How to . . . move (almost) everything to your new phone
10 New Powerscourt Springs hotel to open in defiance of virus gloom
Real news has value SUBSCRIBE