Irish bakery in the dough after M&S UK deal 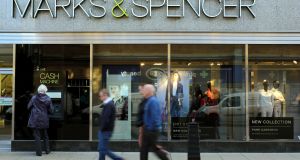 A small artisanal bakery company in Waterford has won a major contract to supply Marks & Spencer across the UK. Photograph: Chris Radburn/PA Wire

A small artisanal bakery company in Waterford has won a major contract to supply Marks & Spencer across the UK, where the retailing giant operates more than 200 foodstores.

The Lismore Food Company, which set up in the same premises as a cafe only last year, will start supplying its All Butter Irish Shortbread biscuits to the British retailer later this month.

The company is run by brothers Owen and Ken Madden, who operate the Summerhouse cafe and bakery in town, and Beth-Ann Smith, the head chef of Lismore Castle.

Their biscuit company supplies up to 100 outlets in Ireland, they say. Its website lists stockists such as the Avoca chain and grocery outlets such as Fallon & Byrne in Dublin.