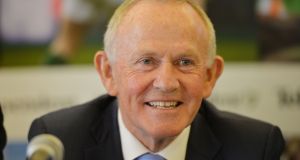 Leslie Buckley: A spokesman for INM chairman said he was involved in a range of companies in Ireland and internationally. Photograph: Alan Betson

The chairman of Independent News & Media, Leslie Buckley, and non-executive director Paul Connolly were both shareholders and directors of offshore companies associated with the Mossack Fonseca law firm, the leaked Panama Papers show.

Zelia registered for business purposes in the Isle of Man in 2004, where its affairs were administered by Walbrook Trustees (Isle of Man). Accountants Charles Vanderpump and Nicholas Williamson, of Walbrook, were appointed directors. It was removed from the register in 2007.

Ronver registered in the Isle of Man in 2001 and the same two accountants from Walbrook Trustees became directors. It was dissolved in 2004.

Mr Connolly is the owner of Lynsdale Investments Ltd, which was incorporated in the Bahamas in 1995. All three offshore companies are described as investment companies in the leaked Mossack files.

The files show that AP Consulting, of Clonskeagh, Dublin, took over as the Mossack client representing the three companies in July 1997. AP Consulting was a business associated with accountant Aidan Phelan and Helen Malone.

Mr Phelan and Ms Malone moved to the Isle of Man some years ago. Many of Mr O’Brien’s business interests in Ireland are owned by entities incorporated in the Isle of Man.

There is no suggestion intended that Mr O’Brien has any link with the three offshore companies.

There is nothing illegal about using offshore companies and no such suggestion is intended.

However, the use of such services has been a topic of media debate globally, including in the Independent group, since the publication of the Panama Papers reports earlier this month.

The Panama Papers reports were based on a massive leak to Suddeutsche Zeitung, which shared the data with the International Consortium of Investigative Journalists (ICIJ) and its media partners, which include The Irish Times. The examination of the 11.5 million leaked files for links to Ireland is continuing.

“He takes counsel from advisers in relation to financial and governance matters. He is fully satisfied with the advice he has received, and his tax and business affairs have always been fully compliant and up-to-date. He is resident and pays tax in Ireland.”

Mr Connolly said he was the beneficial owner of Lynsdale Investments from 1995 to 2004.

“I have worked in international corporate finance for over 20 years and offshore companies form an integral part of global corporate merger and acquisition structuring as well as incorporating public companies who are listed on all the major world stock markets.”

Mr Buckley is a restructuring expert who made about €77 million from the sale of shares in Mr O’Brien’s Esat and Digicel mobile businesses. He is a shareholder in China HR, one of the biggest online recruiters in China, which sold its European operations for €76 million in 2013.

He is a shareholder and director of Siteserv and is very prominent in the philanthropic community, fronting efforts to rebuild Haiti, through his Haven Partnership, following the 2010 earthquake there.

Mr Connolly’s investment banking firm, Connolly Capital, has worked closely with a number of major companies, particularly Esat Telecom Group plc, Hibernia Foods plc and the Digicel Group. He is on the board of Communicorp, Mr O’Brien’s company that owns Newstalk, Today FM and 98FM.

The ICIJ is to publish all the names of companies and shareholders in the leaked files early next month.