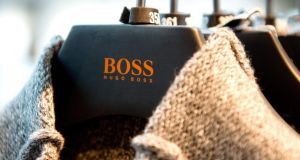 German fashion house Hugo Boss wants to move further into the luxury market and promote its brand more consistently around the globe to help it accelerate sales growth and improve margins in coming years.

Focused on smart but affordable menswear, the group said it would upgrade its core BOSS brand, including by offering more made-to-measure suits, with the aim of eventually doubling the proportion of sales made from luxury items to 20 per cent.

Chief executive Claus-Dietrich Lahrs told an investor event the firm would mainly sell BOSS in its own stores in future rather than via wholesalers as it seeks more control of how its brand is presented and aims to sell more high-price items.

As consumers are travelling more, Mr Lahrs said Hugo Boss was working to present a consistent brand image around the world and better align campaigns for mens and womenswear.

Like other high-end brands, Hugo Boss has suffered of late as the Ukraine crisis has hit demand in Russia and protests in Hong Kong have added to concerns about demand from China, due to a weaker economy and a crackdown on conspicuous spending.

The group expects the challenging climate in China to persist, while the recovery in its core European markets is taking longer than it expected, encouraging it to invest more in eastern Europe and the Middle East.

Boss said womenswear should grow at double-digit annual rates to account for 15 per cent of sales by 2020. It hopes retail sales will account for more than three-quarters of the total by 2020 from just over half now.

Hugo Boss said it would aim for average sales growth in the high-single digits in the coming years, something the firm said recently it would have trouble achieving in 2014.

It reiterated a target to increase its operating margin to 25 per cent from 23.2 per cent in 2013.

Chief financial officer Mark Langer said that achieving a previous target for 2015 sales to reach €3 billion would be difficult, but said he would give more precise goals for next year in March.

1 How much state pension will I get next year?
2 Am I crazy to consider switching to an Ulster Bank mortgage?
3 PTSB plays down Ulster Bank talk as it sells €1.4bn of loans
4 Avolon appoints Paul Geaney as chief risk officer
5 Housing crisis here to stay in absence of big rethink, industry warns
6 Brexit to curb services trade with UK, accountants group warns
7 Up or down – how much is your Local Property Tax this year?
8 Irish tech company Asavie acquired by Nasdaq-listed Akamai
9 Mortgage drawdowns fall by almost a third compared to 2019
10 CRH sells Brazilian cement business for $218m
Real news has value SUBSCRIBE