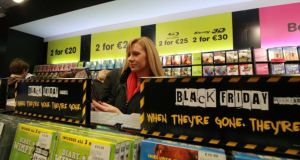 HMV’s Henry Street store. Music sales at HMV and Xtra-Vision increased by 51 per cent last year, according to new figures

Entertainment retailers HMV and Xtra-Vision, which are both owned by Hilco Capital, posted combined group sales of €95.2 million for 2014, up 15 per cent on the previous year.

Sales of CDs were up 170 per cent to over 1 million units as HMV shop-in-shop departments were rolled out to 51 Xtra-vision stores and new HMV stores opened in Dublin, Ballymena, Galway and Belfast. As a result of HMV’s strong performance, the overall CD market in Ireland increased by 14 per cent in 2014.

On a like-for-like basis, music sales at HMV and Xtra-Vision increased by 51 per cent with HMV now taking 46 per cent of the overall physical CD market in Ireland in the full year. Market share reached as high as 55 per cent over the crucial Christmas period.

Vinyl’s resurgence was also evident with HMV saying it sold 50,000 vinyl units in 2014, up 400 per cent on the previous year. The group said that vinyl sales in the week before Christmas were the highest at HMV globally since the mid-1990s.

HMV reopened on Dublin’s Grafton Street last May, barely a year after it was forced to close its flagship store on the same street.

The 16 HMV stores in the Republic, including the Grafton Street branch, closed in February 2013 after the company’s receiver Deloitte decided the business was no longer viable.

Under a deal with Deloitte in April 2014 however, Hilco acquired 141 HMV stores in the UK and Ireland in a deal worth an estimated £50 million (€59 million).

While music CD and vinyl sales were buoyant, the DVD market came under pressure with a decline of 1.3 per cent overall in 2014. Notwithstanding this, HMV said it increased its market share to 60 per cent of the Irish market for DVD and BluRay.

More than 80 per cent of all BluRay discs sold in Ireland were purchased from either HMV or Xtra-Vision last year, according to the group.

Sales of game consoles and software saw a 7 per cent increase over 2013’s total.

Film rentals at Xtra-Vision stores continued to decline however, falling by 23 per cent last year.

“In a year when major new movie releases have been scarce and there have been only a few major album successes, HMV and Xtra-vision have captured more and more market share. With a bumper year of new releases already planned for 2015 we expect the group to have overall growth in like-for-like DVD and BluRay sales as well as continued growth in the physical music sector with vinyl also expected to continue its revival,” said Paul McGowan, chief executive of Hilco.

1 Irish company paid €1.2m a year by collapsed Blumenthal-linked Australian restaurant
2 Hugo MacNeill steps back from Goldman Sachs role
3 Should AIB compensate me for upsetting letter on arrears?
4 Why bosses should not be afraid of speaking out on Instagram
5 Irish economy to grow by 3.4% this year, predicts EY
6 How to turn racists’ genetic arguments against them
7 Coronavirus test fast-tracked by Dublin company Hibergene
8 How to . . . block annoying online ads
9 Enterprise Ireland ranked second globally for VC deal count
10 North’s consumers will be ‘hardest hit’ if UK fails to secure EU deal
Real news has value SUBSCRIBE