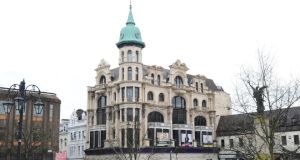 Austins of Derry: Political and business leaders have said the closure of the store, which was older than its world famous counterparts Macys or Harrods, represents a sad end for one of the city’s retail forefathers. Photograph: Trevor McBride

Austins, which operated from a grand five storey Edwardian building, dominated the “Diamond” shopping area in the heart of Derry city centre and was a much-loved landmark for generations.

For the first time in 186 years yesterday the doors of Austins did not open for business and its 53 staff received letters from its owners which said that the store needed significant investment to return to profitability and that they had no alternative but to close.

The unexpected development came as a shock to staff, suppliers and the landlord of the building, Derry-based City Hotel Group, who said it had not been informed or consulted about the closure.

The hotel group had no involvement in the retail business.

However the liquidator appointed to the business, Ronan Duffy of McCambridge Duffy LLP, said like many other retailers Austins had been experiencing difficulties for some time.

Subsequently the business had continued to trade under a new company, Hassonzender Ltd, which included the Hasson family who had owned the business since 1976.

Sinead McLaughlin, chief executive of Derry Chamber of Commerce said: “It is terribly sad news that Austins has closed its doors. We will all wish that action can be taken to save a business that is an icon for Derry.”

The chief executive of the Northern Ireland Independent Retail Trade Association, Glyn Roberts, said the closure was a loss to the North’s retail sector as a whole.