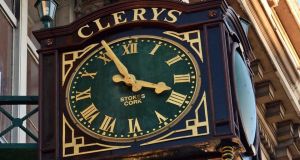 Clerys was closed in June 2015 and 460 people lost their jobs. Photograph: Eric Luke

A High Court challenge has been brought over a lower court’s decision to strike out charges linked to redundancies at Clerys department store in Dublin.

Lawyers for the company, Ms Foley and Mr Redmond applied to have the charges struck out on grounds they could not get a fair trial without being provided with certain material from the inspectors appointed by the Workplace Relations Commission to investigate issues related to the redundancies.

The judge ruled any further adjournment would encroach on the defendants’ rights to fair procedure and an expeditious trial. The prosecution was brought by the Department of Employment Affairs and Social Protection and the Workplace Relations Commission.

The respondents had been charged with offences arising out of the closure of Clery’s in June 2015 when 460 people, of whom 134 were employees of OCS Operations Ltd, lost their jobs.

The Minister, represented by Pádraig O’Dwyer and Breffni Gordon Bl, claims the district judge failed to strike a balance between the public interest in the prosecution of the offences and any risk of an unfair trial. The strike out order was wholly disproportionate and unjust having regard to all the circumstances of the case and that the Minister had fully discharged its duty to make disclosure to the respondents, it is claimed.

Hong Kong stocks fall amid concerns over possible US sanctions 07:49
EasyJet, American Airlines to cut 30% of staff amid coronavirus disruption 07:31
Irish economy to contract by 12%, ESRI forecasts 06:39
ESRI warns of biggest slump ever, Brown Thomas’ plans and Michael O’Leary has a point 06:30
Irish banks’ failure to innovate could leave them written off for good 06:30

1 Beware of the rush to get back to normal business amid Covid-19
2 Ross O’Carroll Kelly column 'not racist towards English people'
3 Irish economy to contract by 12%, ESRI forecasts
4 Brown Thomas and Arnotts shoppers will be able to book time slots for entry
5 ESRI warns of biggest slump ever, Brown Thomas’ plans and Michael O’Leary has a point
6 EU needs to rebuild GDPR after only two years
7 Irish banks’ failure to innovate could leave them written off for good
8 What is in the EU’s €750bn recovery plan and how will it affect Ireland?
9 Joint accounts: if one of us dies, can the other access the money?
10 O’Leary casts unwelcome light on a very Irish political compromise
Real news has value SUBSCRIBE