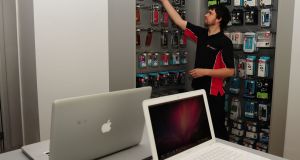 Compu b is a premium reseller of Apple products. Photograph: Aidan Crawley

A High Court judge has approved a survival scheme for the Irish-headquartered parent of Compu b, a reseller of Apple premium computer products, and three related companies in the UK.

The companies employ 395 people, of whom 110 are in Ireland.

He did so on foot of evidence indicating the companies had a reasonable prospect of survival if certain conditions, including implementation of a restructuring programme, are met.

He also noted the significant number of jobs at stake and the absence of objections to examinership.

The companies’ petition for examinership said the Compu b business has historically been profitable but a number of factors had come together which had significant negative impacts on the companies, including the Covid-19 pandemic, store closures resulting from that, underperforming stores and acceleration of customer trends towards buying online.

Unless court protection was secured, the companies would be unable to pay their debts as they fall due from July 2020, it was stated.

Following his appointment, Mr O’Connor put together a scheme of arrangement which has since received the necessary approvals at meetings of creditors.

On Monday, Kelley Smith SC, for the companies, sought court approval for the scheme.

Mr Justice McDonald said, having read the scheme and the “very helpful and detailed” report of the examiner, he was satisfied all the requirements for court approval were met.

He made orders approving the scheme and fixed Wednesday, October 14th, as the date for the companies’ exit from examinership.

Compu b, founded in Limerick in 1992, has six stores here – at Grafton Street, Dublin; Dundrum Town Centre; the Pavilions, Swords; Limerick, Cork and Galway – and 24 stores in the UK.

CBRL was incorporated to trade the group’s Irish activities through a separate entity mainly to protect against concerns arising from Brexit and foreign exchange rate volatility. It undertakes similar activities to CBL and its corporate clients include Amazon and Ryanair.

CBL acquired the loss making Stormfront group of 23 stores in late 2019, to acquire a more significant retail presence in the UK market and improve buying power. The Covid-19 pandemic delayed planned integration and a cost reduction programme, with the result the Compu B group incurred significant ongoing losses through the Stormfront group between January and May 2020.