H&M sales rise more than expected in May 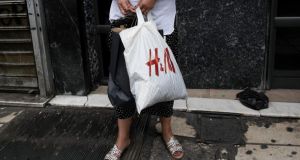 The world’s second-biggest fashion retailer Hennes & Mauritz on Monday reported a bigger rise than expected in May sales in local currencies.

Local-currency sales at the Swedish budget apparel firm, which has the bulk of its business in Europe, grew 10 per cent in the last month of its fiscal second quarter, beating a forecast 8 per cent in a poll of analysts.

The company said currency weakness against most of its sales currencies had a substantial positive effect on reported sales. The fast-expanding firm said that, including value-added tax, sales were up 10 per cent in local currencies and up 20 per cent in crowns.

Alandsbanken analyst Lars Soderfjall said the figures were a good sign ahead of H&M’s full quarterly report on June 25th.

H&M which, unlike its biggest rival Inditex, sources most of its products in Asia in US dollars, is expected to see higher sourcing costs in the quarter.