Green shoots after a fallow period at Arboretum 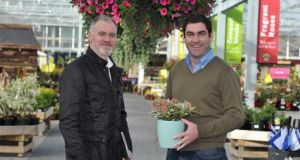 Fergal and Barry Doyle at Arboretum

It wasn’t the advent of the recession, austerity and declining consumer spending that hit Arboretum garden centre hard. Rather, a new road bypassing the centre of Carlow town made it more difficult to get people across its threshold.

Two years on, a focused marketing programme has paid dividends. The shop has returned to growth, employment is at a record high, and a second branch is set to open in the coming months.

Arboretum was founded in 1976 by Rachel Doyle, who gave up a career in teaching to pursue her horticultural passion and was soon joined in the venture by her husband, Frank.

In 1985, they moved again, renting a site near Thompsons Steel Works in the centre of Carlow. In 1999, Aldi came knocking and bought the site.

The Doyles had a greenfield site of almost 4.5 hectares beside their home in Leighlinbridge and developed this as a new home for the garden centre. “People said we were mad to leave the town, as that’s where we had grown the business,” says Barry Doyle, who along with his brother, Fergal, is now at the helm of the family business.

The move outside the town coincided with the cusp of the Celtic Tiger. The centre was soon booming, as the property market soared and people spent on their homes and gardens.

“It allowed us to grow; it gave us the cash flow to allow us to grow the business and to keep investing back into it to make it a better place,” says Fergal.

The brothers grew up in the business, and the passion was “always there”. Barry studied horticulture after school, while Fergal pursued a business degree, so it was a natural fit when the two moved into the business full-time.

“We look at different ends of the business, and it helps that we have different interests,” says Barry, who acts as chief executive, while Fergal is chief operating officer. Their mother Rachel is executive chairman and their father is retired.

“Healthy arguments” are a cornerstone of their relationship today, and it helps that they are both focused on making the right decisions for their 80 employees.

“If we were very alike, if we thought the same and had the same strengths and weaknesses, it would be difficult for us. But we’re like chalk and cheese, which is probably why it works,” says Fergal.

“We weren’t hit so hard,” says Fergal. “We had to think differently and diversify our ranges, to look at price points and make it more suitable for the times that we were in.

“Nothing we sell is a necessity for the customers, everything is a luxury,” he says, noting that pricing became more important.

“In a way it helped us a bit, as people didn’t go on foreign holidays. They were spending more time at home, so they looked to their home space and to making some improvements there.”

“We didn’t let anyone go. We felt that we had invested a lot of time in the people we had, we didn’t have a massive dip in turnover, and we worked hard with staff to rethink the layout of the store,” says Barry.

“We had a lot of passing trade. We were right on the Dublin-Waterford route and then all of a sudden we were off the route,” says Barry, adding that over a six-month period, trading was “quite difficult”.

“People didn’t know how to get to us at the weekend, so we worked very hard on marketing,” he says.

“We weren’t allowed to put any signage on the motorway, which is still a bone of contention. We’ve had various battles with the National Roads Authority. It seems that there’s one rule for Ireland, and a different rule for our colleagues in the UK.”

Committed marketing efforts saw a revival in Arboretum’s fortunes, as it completed a €1.2 million refit, introducing a new fashion and kitchen store to the centre.

“It’s a true destination rather than a garden centre. We don’t say garden centre any more, just Arboretum,” says Barry.

The company is set to acquire the National Garden Exhibition Centre, in Kilquade, Co Wicklow, with a view to opening in mid-May.

At 2.1 hectares, it’ll be a smaller offering than the Carlow store, but it will also have a cafe and the plan is to make it a similar destination store.

“We think it’s apt to bring Arboretum to the garden of Ireland,” says Barry. A third centre is not yet on the cards. “It’s a big step in opening the second store, so we’ll play it by ear after that.”

“I’d like to think so, but we’ll let them be free spirits,” says Barry. “We’ll let them find their own way. We wouldn’t force it, just like our parents never forced us.”