Gaming giant Gtech to bid for State’s next lottery licence

Italian-owned company considering possibility of joint bid with An Post 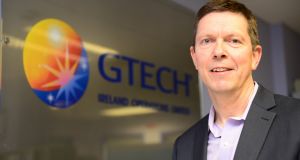 Declan Harkin of Gtech: the Italian-owned company, which employs 70 staff at its Dublin office, already supplies An Post with the network of ticket terminals in shops


Gtech, the world’s largest lottery and gaming business, has confirmed it will bid for the State’s next lottery licence.

The Italian-owned company, which is both an operator and a gaming technology supplier, also indicated it was exploring the possibility of mounting a joint bid with the current operator, An Post.

Gtech is the first big international player to confirm it will take part in the upcoming competition for a new 20-year licence.

The company, which employs 70 staff at its Dublin office, already supplies An Post with the network of ticket terminals in shops.

In an interview with The Irish Times , Gtech senior vice president and chief operations officer for Europe Declan Harkin said forming an alliance with An Post was a possibility, but equally the company had the resources to enter the process alone.

“Obviously, working together is something I’d like to think both companies would continue to consider very strongly,” Mr Harkin said.

An Post’s chairman designate Christoph Mueller said last week he believes the State company should work with a partner in its bid to retain the licence.

Mr Harkin said consumers could expect “a very significant refresh of the technology used to support the business” should Gtech win the licence.

He also hinted there was likely to be a roll-out of new self-service points of sale in shops.

“We’ve got a very solid long-term presence in Ireland so we are already integrated in the market.”

Mr Harkin acknowledged that one of the key selling points of the Irish business was the relatively untapped online market, which still only accounts for 2 per cent of sales, significantly less than other European lotteries.

In its most recent set of results, the National Lottery saw online sales increase by 43 per cent to €8.7 million in 2012 as the number of registered players rose to 40,000.

Under new Lottery Act, the strict rules governing online sales and the cumbersome player registration process will be relaxed to help grow the business online.

Italian gaming group Lottomatica bought Rhode-Island based Gtech for $4.7 billion in 2006, forming the biggest lottery business in the world.

Earlier this year, the Italian group took the unusual step of rebranding itself as Gtech in recognition of its subsidiary’s strong global brand.

Gtech is likely to be joined in the competition by An Post, UK operator Camelot and possibly Australian gaming group Tatts which have all declared an interest in the process.

The Department of Public Expenditure and Reform will solicit expressions of the interest for the licence in the coming days ahead of the bidding competition later in the year, which will involve an upfront payment to the State.