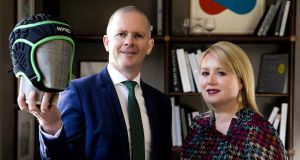 A Co Galway sports technology company has been selected as the first participant in a trial by World Rugby aiming to reduce the risk of head injuries and concussion.

N-Pro has developed a headguard which provides protection against impacts using material that can deal with repeated energy, whereas current offerings on the market protect against scrapes and abrasions.

Founded by Mark Ganly and Dr Sandra Ganly, the company has received €2 million in funding from backers, including British advertising agency M&C Saatchi, Enterprise Ireland, the Western Development Commission and wealth manager Elkstone. So far, the company has invested half of its funding in the research and design of its headguard.

N-Pro has already commissioned its own scientific testing, which has shown how the headguard reduces impact force to the head by up to 75 per cent compared to other rugby headguards on the market.

But the product, which retails from €120, will now have to go through a process likely to last up to three years before being approved by World Rugby for use in competitive games with the claim that it can improve head protection.

World Rugby’s chief medical officer, Martin Raftery, noted that the organisation has set the bar for entry to the trial quite high “to achieve specific, quantifiable, medical advances”.

A spokesman added that this trial is just one part of the approach to injury prevention. It is also promoting an injury-preventing warm up routine and a tackle technique to lower the position of tackles.

Founded in 2014, N-Pro uses technology to reduce the G-force energy transferred to a players head during impact, one of the major factors in sport-induced brain injury.

Mr Ganly believes N-Pro is about 18 to 24 months ahead of its competitors when it comes to development of a product which will improve player welfare in rugby. The company has also sold its products to players in sports including soccer, Aussie Rules football, and mixed martial arts. “Our plan is to develop products into a range of sports specifically where there’s soft shell [headgear],” Mr Ganly said, adding that the company is looking to raise an additional €500,000 to improve its research and development.

The N-Pro is available in Ireland, the UK, Australia, New Zealand, South Africa and the Benelux region and the company plans to expand to France, Germany, Italy and Spain next year.