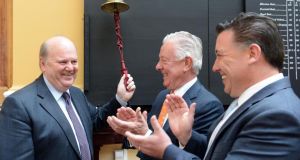 Minister for Finance Michael Noonan with Stephen Vernon and Pat Gunn of Green REIT at the company’s listing on the Irish Stock Exchange in July last year. FTI advised the company on its IPO. Photograph: Eric Luke

It was the top performer in FTI’s strategic communications division globally which has offices in 26 countries.

Accounts for FTI show the accumulated profits rose to €1.2 million from €834,000 the previous year. The Irish company’s operating margin for 2013 was more than 30 per cent.

FTI in Dublin has worked on some of the biggest corporate transactions in the last year including the flotation of Green REIT (the first primary initial public offering (IPO) on the Irish stock exchange in seven years) as well as the acquisition of Elan by Perrigo.

It also advised on the IPO of GameAccount Network, a gaming software company led by Dermot Smurfit jnr, which listed in Ireland and London in November.

It is the long-term adviser to clients such as Aer Lingus, aviation leasing firm Avolon, drinks maker C&C Group and paper and packaging business Smurfit Kappa.

Its parent company is listed on the New York Stock Exchange, has revenue of $1.65 billion and employs 4,200 people.

During the financial crisis it was best known for advising on the bankruptcies of Lehman Brothers and General Motors and also working on the complex investigation into fraudster Bernie Madoff.

In Ireland, FTI Consulting also advised lenders and bondholders of the Quinn Group after it came under pressure because of the economic recession and losses made by company founder Seán Quinn on shares in Anglo Irish Bank.