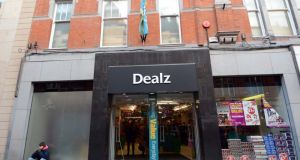 Dealz, where (almost) everything costs €1.49, is now selling to some 300,000 customers a week in Ireland. (Photograph: Eric Luke / THE IRISH TIMES)

Dealz owner Poundland said on Thursday that it has a long-term target of 70 stores for Ireland, as it reported strong growth for its Irish and UK operations, but cited the weak euro as a challenge.

The British discount retailer, which sells almost all of its products at the single price point of €1.49 in Ireland, said it opened 10 stores, including one retail park, across Ireland in the year to March 29th. This brings its total number of Irish outlets up to 41 stores and its total number of retail parks to four.

Jim McCarthy, chief executive, said the company saw “strong trading” across the UK and Ireland, adding that the Dealz brand is “still under-exploited” in Ireland.

The company does not disclose results for Ireland, but said that it now serves some 300,000 customers a week in Ireland. With an average basket of €6.50 (across the UK and Ireland), this would give annual turnover for the company’s Irish operations of about €100m. However, the figure could be north of this if the average Irish basket was higher than that achieved across the Irish Sea. Indeed Mr McCarthy referred to “attractive financial returns” for the Irish operations in his comments.

Across the UK and Ireland, Poundland said it made an underlying pretax profit of £43.7 million (€60.9m) in the year to March 29th, up 19 per cent on prior year, as sales grew 12 per cent to £1.12bn. However, it cautioned that it expects trading in the first half of its new financial year to be subdued after sales growth slowed.

Given the company’s success in Ireland, which “demonstrated that we could generate attractive financial returns whilst rapidly establishing a new brand in a different geography” Poundland is now targeting a low cost, low risk entry into the Spanish market, where it will open 10 stores under the Dealz name.

In all Poundland expects to open at least 60 new stores in the UK and Ireland in the 2015-16 year and continue with a trial in Spain.

Same Brexit stumbling blocks persist as Barnier travels to London 13:08
Unilever’s Dutch and British arms merge after 90 years ahead of Brexit 12:26
‘Completely different economy’ needed to tackle emissions 12:24
A tale of two pandemics for Smurfit Kappa and Greencore 11:52
Retail sales up by 8.1% in October compared to last year 11:52

1 Anti-alcohol zeal of public health experts peppers reopening debate
2 Admission of mistake in Oxford vaccine dose raises doubts over reliability
3 White knights or loan book cannibals – what will happen at Ulster Bank?
4 Same Brexit stumbling blocks persist as Barnier travels to London
5 AIB revives €1bn-plus problem mortgages sale
6 A tale of two pandemics for Smurfit Kappa and Greencore
7 Oxford-AstraZeneca vaccine may be trialled again to prove results were ‘not a mistake’
8 Move to EU or face disruption, City of London is warned
9 Unilever’s Dutch and British arms merge after 90 years ahead of Brexit
10 Career opportunities? The ones that just may knock
Real news has value SUBSCRIBE