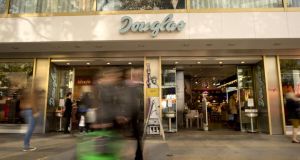 Douglas, which operates more than 1,700 stores in 19 countries, is a changed business from the one Advent bought for €1.5 billion in 2012. Photograph: Odd Andersen/AFP/Getty Images

Private-equity company CVC is buying the company from Advent International and the founding Kreke family.

It sold the Christ jewellery division and acquired French fragrance chain Nocibe as it focuses on its position as Europe’s biggest perfume retailer. On May 29th, Douglas said it planned a return to the stock market through a sale of Advent’s stake plus €70 million in new shares.

Soren Vestergaard-Poulsen, a managing partner at CVC, said Douglas has “the strength to be a global brand” and would use internal investment and acquisitions to possibly expand into Asia and other regions outside Europe. Douglas posted sales of about €2.5 billion in the 2014 financial year. It controls about 17 per cent of the European perfume chain market.