Could support of Bill Gates be gateway to success for beleaguered security firm G4S?

London Briefing: The vote of confidence from the Gates foundation is welcome news for new G4S chief Ashley Almanza as he sets about restoring the company’s reputation 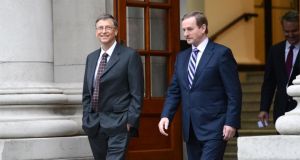 Bill Gates, founder of Microsoft, with Taoiseach Enda Kenny TD in January at Government Buildings, Dublin. The investment has been made via his charitable fund, the Bill & Melinda Gates Foundation. Photograph: Dara Mac Donaill/The Irish Times

When a company is in trouble, savvy directors regularly scour the share register for signs of stake-building by potential predators, or for evidence that previously supportive institutional investors are selling out.

Troublesome new shareholders, such as hedge funds betting on a bid, are the last thing a beleaguered company needs – unless, of course, it’s a new investor that’s supportive of the management.

New investors don’t come much more supportive than the world’s richest man. The disclosure that Bill Gates has taken an interest in G4S is a much-needed piece of good news for the security group as it attempts to rebuild its reputation after botching last year’s London Olympics contract.

Gates has not bought the shares personally – it is possible he has not even heard of G4S – but the investment has been made via his charitable fund, the Bill & Melinda Gates Foundation. The foundation, which was already sitting on a stake in G4S, has topped up its stake with another 6.5 million shares, taking its holding to 3.2 per cent. This is just above the 3 per cent level at which ownership of stakes must be disclosed to the stock exchange, hence the emergence of the magical Gates name.

Share drop
The effect on the G4S share price was rather less than magical – they fell 3 per cent yesterday, slicing several million pounds from the value of the foundation’s £110 million (€129 million) stake and valuing the business at about £3.3 billion. But to have attracted a high-profile investor such as Gates is a real boost for Ashley Almanza, the group’s new chief executive.

Almanza made headlines last month when he took over the top job at G4S , the world’s biggest security group, just three weeks after arriving as finance director.

It seems he may have his predecessor, Nick Buckles, to thank for his supportive new shareholder. Representatives from the foundation’s asset management company, Cascade Investment, met Buckles some months ago.

He was still in charge at the time and handling the fallout from the Olympics, when G4S failed to provide enough guards for the Games. Clearly, they liked what they heard – or perhaps they like the fact that Buckles, who spent almost 30 years with G4S, has gone in the wake of the Olympics debacle and recent profit warning.

Either way, Cascade has a reputation as a long-term investor and, while 3.2 per cent is a small stake, it looks to be a secure one. The two sides plan to meet in the next few weeks to discuss the investment.

Rough ride
Almanza has endured a rough ride in his first few weeks as chief executive. Last week he and the rest of the board faced a rowdy demonstration at the G4S annual meeting, with protesters questioning them over controversial Israeli prison contracts and an Angolan man, Jimmy Mubenga, who died on an aircraft while being deported from the UK by G4S security guards.

There were questions over the disastrous Olympics contract, which cost the company £88 million; over its failed £5.2 billion takeover attempt for Danish cleaning company ISS, which cost more than £50 million; and about G4S’s recent profit warning.

There was a sizeable protest vote against the remuneration report, with some 22 per cent of votes refusing to back it.

Against that background, the vote of confidence from the Gates foundation is welcome news for Almanza as he sets about restoring the company’s reputation.

The Gates name isn’t a guarantee of success, however. The foundation also owned a stake in JJB Sports, once Britain’s largest sportswear retailer. It took its investment in JJB after a series of profit warnings from the retailer and stumped up cash in a rescue rights issue.

But JJB went bust last year after failing to find a buyer. The collapse cost more than 2,000 jobs – and lopped some £20 million or so from the Microsoft billionaire’s fortune.

Fiona Walsh is business editor of guardian.co.uk in London