Chief executive wins right to vote board of Meadows & Byrne 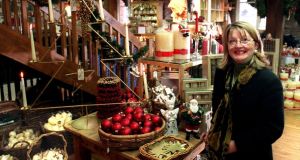 The chief executive of the company which owns home furnishings and accessories store Meadows & Byrne is entitled to exercise a 51 per cent voting right to increase the number of directors on the firm’s board, the High Court has ruled.

Freda Hayes, chief executive of Blarney Woollen Mills Group, which merged with Meadows & Byrne, has been in dispute with three other directors over whether her shareholding amounted to a majority stake for the purpose of increasing the number of directors.

Ms Hayes contended she enjoyed 51 per cent of the voting rights at board meetings via her ownership of ordinary shares and a single special share. The other directors, Patrick Kelleher, Robert Reardon and Frank Kelleher, denied this.

Ms Hayes left Blarney in 1992 and set up Meadows & Byrne, before rejoining under a merger between the two firms.

As well as ordinary shares, she holds a single special share provided for under the company’s articles of association and a shareholder agreement of March 3rd, 2000.

Mr Justice Max Barrett, ordering she was entitled to a 51 per cent voting right, said the impasse between her and her fellow shareholders arose due to interpretation of the shareholding agreement and the articles of association dealing with voting rights.

Ms Hayes wanted to increase the number of directors from nine to 13 and matters came to a head when she called for an egm for this purpose, he said.

It was a general rule of contract law that words in commercial documents must not flout business common sense, he said.

The defendants had contended that while Ms Hayes could vary the number of board positions, only the board could appoint directors.

The judge said the articles of association did not suggest the power granted to the board was exclusive. Had that been the intention, it would have been a very simple matter to provide for that but the articles fell “well short” of saying the power could be removed from a general meeting of shareholders.

The judge also ruled there was no basis for the defendants’ argument concerning what voting rights Ms Hayes’ enjoyed in relation to her single special share. The natural and ordinary meaning of her voting rights under the share agreement “flaunts neither common-sense nor ‘business sense’,” he said.

She was entitled to exercise “her minimum 51 per cent voting rights” at a general meeting to increase the number of directors and to appoint those directors.