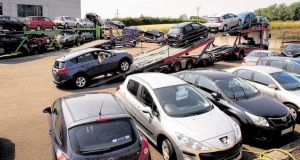 Cars being loaded on to transporter lorries at McCabes garages in Ardee in July last year.

A car dealer aged in his 70s who ran garage businesses in Co Louth over four decades has lost a bid to prevent the fast- tracking of a bank’s application for a €16 million summary judgment against him on grounds including his limited reading and writing skills.

Patrick McCabe was “at the helm” of the McCabe garage business in Drogheda and Ardee, Co Louth, for the last 40 years and Irish Bank Resolution Corporation did not accept that his claim of poor literacy prevented the bank’s proceedings against him and others being fast-tracked in the Commercial Court, Cian Ferriter, senior counsel, for the bank, said.

It had never previously been suggested that Mr McCabe had any impediment in his business dealings with the bank, counsel added.

An accountant for Mr McCabe had told IBRC the dealer was also involved with the National Assets Management Agency and had an “overall exposure” of about €100 million, an IBRC official said in an affidavit. IBRC was told various properties owned by Mr McCabe and his companies were not worth €10 million combined, she said.

Mr Justice Kelly said Mr McCabe had been described as “illiterate” but that did not appear to be the case as the court had been told he could read, albeit at a much slower pace than most people, and he had also signed documents during his many years in business, and an affidavit.

The judge also rejected arguments of culpable delay by IBRC in bringing the court proceedings such as to deny it the entitlement to avail of the Commercial Court’s fast-track procedures.

In the circumstances, the judge agreed to transfer to the Commercial Court list the bank’s case brought against Mr McCabe and his wife Alicia, of Blakestown, Ardee, Co Louth, and three companies – McCabe’s of Ardee Ltd, McCabe’s Garage (Drogheda) Ltd and McCabe’s Garage (Ardee) Ltd. The last company was placed in voluntary liquidation in October but its nominated liquidator was later, after IBRC took court proceedings, replaced by a nominee of the bank.

The judge adjourned the matter to Monday, when the defendants must outline the nature of any defence they wish to advance.

IBRC argued it had engaged since 2010 in negotiations with the defendants and their agents to try to achieve a commercial resolution to the debts. It said it was ultimately not possible to reach agreement on proposals for debt reduction and the disposal of properties owned mainly by either the couple or some of the McCabe companies, including some 160 acres surrounding the couple’s farm at Blakestown.

Demands for repayment were made last July and, when the demands were not met, receivers were appointed over various properties and the proceedings were initiated, the bank said.

Earlier, Mr Ferriter said IBRC had resolved matters with another defendant, John McCabe, a businessman and son of the couple, and was not proceeding against him.