Cantillon: Are there now only three law firms left in the ‘big four’? 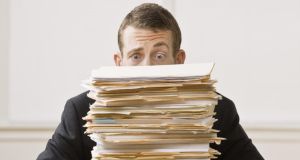 The most recent edition of the Law Society Gazette lists out the numbers of solicitors employed by the top 20 firms. For an industry that likes to keep things secret, this constitutes a rich vein of information.

Overall, the number of solicitors employed by the firms grew 9 per cent last year, outstripping growth in economy by a factor of two. Arthur Cox remains the largest firm by number of solicitors, employing 269 compared with second place Matheson which has 265 on the payroll. It has leapfrogged A&L Goodbody (262) while McCann FitzGerald remains in fourth place (204).

McCann is now closer in size to the fifth- and sixth-placed firms Mason Hayes & Curran (178) and William Fry (177) than the top three. It raises the question as to whether the “big four” firms have now become the “big three” with a clear second tier emerging. A third tier is also apparent, topped by Byrne Wallace (96) and Maples and Calder (94). It is tailed by Beauchamps (72).

Quite what all this says about competition in the market for legal services is hard to fathom. Arguably the emergence of three dominant players when there used to be four or five is not a good thing. But at the same time the firms that seem to be growing fastest are second- and third-tier firms Mason Hayes & Curran, Maples and Calder and Eversheds.

The other thing to consider is that it says absolutely nothing about how much money the firms are making, but back-of-the-envelope calculations are possible based on Mason Hayes & Curran’s exceptional transparency about fee income. Based on its €60 million turnover (or €330,000 per solicitor), the top three firms are bringing in around €90 million each.