Four places available to students from Ireland and Britain annually 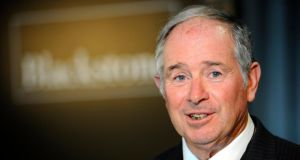 Stephen Schwarzman: has contributed €73 million to his scholarship programme

Wall Street mogul Stephen Schwarzman, whose Blackstone firm is one of the most biggest global players in the private equity business, held a groundbreaking ceremony last week for a €220 million scholarship programme in China for students from around the world, based on the prestigious Rhodes Scholarship.

Accompanied by Chinese government and university officials, the Blackstone founder turned a shovel at a ceremonial event on the campus of Tsinghua University. The first class of Schwarzman scholars will study there in 2016.

“My vision for Schwarzman scholars is to help educate a future class of leaders who will advance relationships of mutual respect between the West and China, reducing tensions and leading to a new era of mutual prosperity,” Mr Schwarzman said.

Sunken garden
The eight-storey building will include an auditorium, library, sunken garden, dining hall, a fitness area, apartments and a floor area of over 250,000sq ft.

It will include a forum modelled on a similar structure at Harvard’s John F Kennedy school of government.

The US tycoon reckons it is the largest philanthropic gift with foreign money in China’s history. The endowment will allow 200 students each year to take part in a one-year master’s programme in public policy, economics and business, international relations or engineering at Tsinghua University, starting in June 2016.

Its aim is that 45 per cent of the students would come from the United States, 20 per cent from China and the rest from other parts of the world.

There will be four places available to students from Ireland and Britain.

Senior leaders
Tsinghua is one of China’s top universities and has produced many of the country’s senior leaders, including both president Xi Jinping and former president Hu Jintao.

It was set up 1911, when the US used the indemnity money paid by the Chinese government after the anti-foreigner Boxer rebellion to establish a preparatory school for students later sent to study in America.

The list of donors for the new programme includes Delta Airlines, Glencore, the IT firm Lenovo and other major US blue-chip companies.